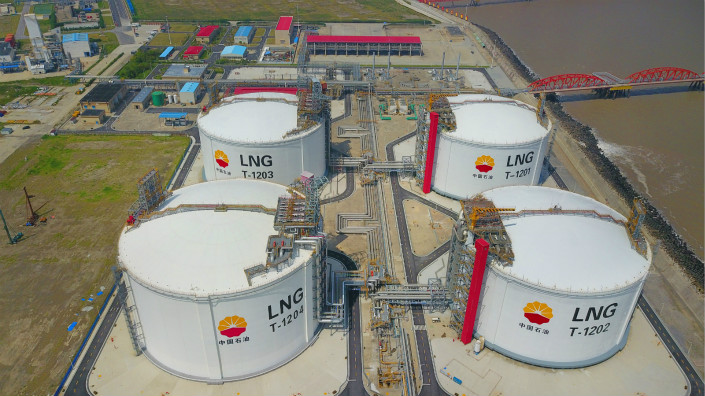 China-backed liquefied natural gas (LNG) projects have made major advances in Canada and the Philippines, as Beijing promotes development of the cleaner-burning fossil fuel for its own use and as part of its drive to help other developing countries build out infrastructure.

The board of China’s top oil producer PetroChina Co. Ltd. approved the company taking a $3.46 billion stake in the ‘LNG Canada’ project, according to a filing (link in Chinese) with the Hong Kong stock exchange. While the filing did not disclose PetroChina’s total share, earlier agreements suggested it will be 20%, putting the project’s total value at around $17.3 billion.

The Canada project involves a consortium of Royal Dutch Shell Plc., Malaysia’s Petroliam Nasional Bhd (Petronas), and Japan’s Mitsubishi Corp., and aims to develop LNG processing and storage units as well shipping facilities on the coast of British Columbia, Canada’s westernmost province. The facility will produce up to 26 millions metric tons per year, primarily for export to Asia.

While Petronas and Mitsubishi still need to give their final approval, industry insiders say it is highly unlikely they would pull out at this stage. A final investment decision for the whole project is expected in the next few days, according to a report in Canada’s The Globe and Mail.

Chinese companies are showing increased appetite for investing in Canada’s energy sector, particularly as trade tensions with the U.S. erode confidence in the success of several major projects that are still in the pipeline but are facing an uncertain future.

China’s LNG usage is expected to surge in the years ahead as the country looks to reduce its reliance on highly-polluting coal for energy. Last year consumption rose by 46% to 38.13 million metric tons, making China the world’s second biggest LNG importer behind Japan.

The country’s state-owned entities are also increasingly active in helping other countries develop infrastructure for LNG facilities meant for local consumption of the fuel. Beijing has encouraged such development under its “Belt and Road Initiative” that typically sees Chinese companies build infrastructure in other developing countries, often with China-supplied financing.

In one of the latest developments on that front, China Energy Equipment Co. (CEEC) has entered a deal worth $700 million to construct the Philippines’ first floating regasification unit in Bataan province near Manila, the Manila Bulletin reported on Friday. Such complexes are used to convert LNG from liquid form back into gas that can then generate electricity at power plants.