Opinion: What Exactly Do We Want to Rescue About the Stock Market? 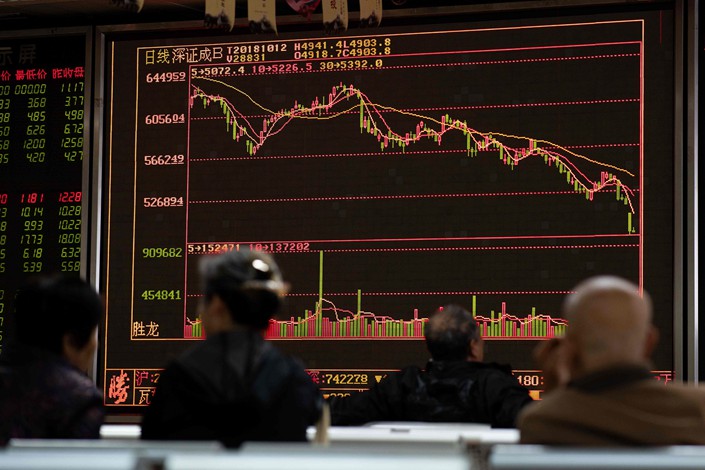 The government is staging yet another rescue of the domestic stock market. Photo: VCG

The Chinese government is staging yet another rescue of the A-share market. But the origins of this crisis are quite different from those that sent the stock market slumping just over three years ago.

This time, the causes can be traced back to the crackdown on shadow banking and freewheeling financial institutions, which has led to a significant slowdown in the velocity of money circulating outside the formal banking system. Inevitably, these factors have affected liquidity in the stock market.

But cleaning up the shadow banking industry and putting it back on track is something that has been long overdue. For the financial system to reach its nirvana, financial institutions need to pay the necessary price for their reckless behavior.

The high-rollers of the good old days were not really deep-pocketed. Instead, they rigged the game to leverage bank funds in the most efficient way. Their unscrupulous behavior can be seen in Tomorrow Holdings Group, a company that used complex and devious measures to control financial institutions and officials; in Huarong Asset Management under the control of Lai Xiaomin, who took advantage of the state’s creditworthiness to channel money to private companies and seek personal gain; in Anbang Insurance, which sucked up low-cost funds from banks that came from sales of wealth management products. All of these activities were an outrageous flouting of rules, regulations and laws. They were illegal and unsustainable.

Once the blood transfusions that have distorted liquidity in the A-share market come to an end, we need to rebuild our market mechanisms to create a healthy market. At the same time, we must remain vigilant against the resurrection of these old illicit practices under new guises. And it is crucial that regulators stick to their fundamental positions and principles and do not backslide or waver.

The current crisis in the A-share market has been characterized by the liquidity crunch faced by major shareholders of listed companies. After more and more shareholders pledged their holdings for loans, and prices of the stocks continued to fall, triggering margin calls, regulators stepped in. Concerned about the prospect of a vicious sell-off cycle, they banned (brokerages) from dumping the pledged shares they held and ordered the “national team” to inject funds to shore up plummeting prices. But such measures can only be a temporary stopgap because the stock market has an insatiable appetite for such bailouts. This is merely throwing money into a bottomless pit. If regulators persist with these measures, the “national team” will be stuck in an endless competition against other institutions, market will not be able to play its role, and the A-share market will not bottom out.

During the last stock market rescue three years ago, some “national team” accounts were managed by professional investors including public funds. The campaign was phased out with little loss incurred. This time, if we fall back on administrative methods without setting clear boundaries, we face a bleak outlook.

When it comes to dealing with the causes of the lack of liquidity among major shareholders, we need to change the medicine according to each illness.

Some major shareholders are big stock speculators themselves. They have virtually no industrial investment and an insufficient or even zero capital base. They leverage their investments in an extremely reckless manner and their stocks are worthless pieces of paper. Regulators should just let these companies’ stock prices drop and force them to exit the market.

However, some major shareholders own industrial bases that generate cash flow. Their ability to raise funds in a market-based way in the capital market has been weakened due to poor financial management. As regulators ratcheted up restrictions on their ability to sell their holdings, they were forced to pledge shares to get loans. This type of liquidity crunch deserves sympathy and help.

The key to this rescue effort lies in how to ensure that funding support is given to enterprises that are in temporary difficulty, but are still viable. The core issue remains the effectiveness of the capital market’s allocation of resources, and excessive intervention by the government risks causing distortion and unfairness.

So far, the rescue measures have focused on supporting private companies’ bond sales, relaxing limits on insurance companies’ equity investment, and encouraging private funds to expand in a way that complies with regulations. The key now is their implementation.

Securities regulators must adjust distorted policies. They should let the market play its role by (loosening curbs on) initial public offerings and the issuance of new shares. At the same time, they should not backtrack on the crackdown on some other practices. For example, now that they have realized backdoor listings distort the valuations of listed companies, they should not relax or even unwind their tightening stance on such transactions.

The fundamental purpose of market rescue efforts should be to restore confidence. But that is not as simple as just driving up stock prices. Confidence is based on investors’ judgment about the economy, and on evidence that market mechanisms are understood and respected by policymakers. We need to build trust in the judicial system and abandon regulation that transgresses market rules or involves rent-seeking. Regulators should make their role one of functional regulation so that fraud and manipulation in the securities market are investigated and severely punished on a regular basis.

Ling Huawei is the executive editor of Caixin Weekly and an editorial board member of Caixin Media.