In Depth: Rags to Riches Entrepreneurs Head for Inglorious Fall 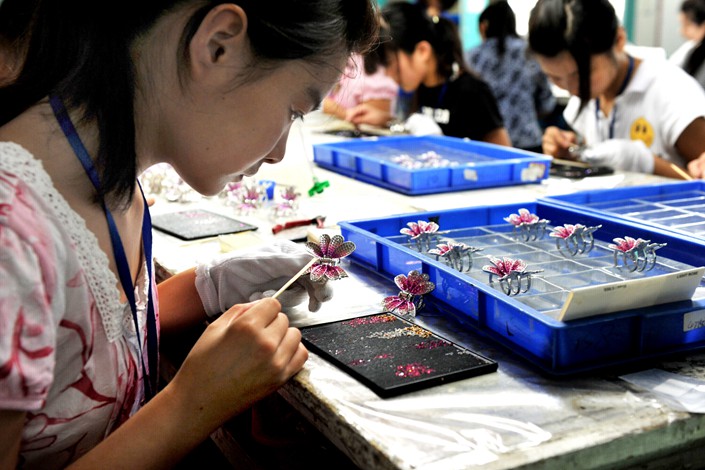 Not all private companies are equal in the eyes of local governments, and that's unfortunate for thousands of businesses who hoped they'd be saved by the state-backed rescue plan now underway to bail out the struggling non-state sector.

Zhejiang province-based Neoglory Holdings Group Co. Ltd., is one of them. A classic rags-to-riches tale of a small-town private trader and manufacturer that branched out into property and finance, Neoglory is now facing a day of reckoning as its debt-fuelled expansion turns to bust. The company, which by its own admission is weighed down by 46.9 billion yuan ($6.76 billion) of liabilities, said on Monday that it had failed to repay principal and interest totaling 1.37 billion yuan on three separate bonds, and failed to honor payments related to two other bonds. Its revelation follows the announcement of 2.74 billion yuan of missed payments in September.

The company's billionaire owners, Zhou Xiaoguang and her husband Yu Yunxin, also risk losing control over their listed property arm as the shares they pledged as collateral for loans face seizure by lenders.

The future of the company, once feted by local government officials, bankers and the media, looks bleak, and its failure to make it onto the list of the Zhejiang government’s private sector rescue campaign leaves it struggling against the odds to survive.

“Most private firms in trouble these days are those who invested indiscriminately and expanded in a disorderly way,” an executive with a private fund manager, who declined to be identified, told Caixin. “These companies leveraged up, especially between 2013 and 2016, and plugged into the capital markets. They pledged shares or got financing in other ways, speculated in stocks or got involved in mergers and acquisition until the money was all gone.”

Neoglory was born in 1995 in Yiwu, a town known for its small-goods wholesale market near Wenzhou, China's booming private sector capital in the 1990s. Zhou started out as street vendor selling embroidered curtains. Within a decade she had built one of the largest accessory business empires in China and became known as the Queen of Costume Jewelry.

In 2004 Zhou and Yu branched out into property development and finance. By 2017, they controlled an 80 billion yuan conglomerate that included a Shenzhen listed real-estate developer and more than 100 subsidiaries. That year the couple ranked 65th on the Hurun Rich List of Chinese entrepreneurs with an estimated net worth of 30 billion yuan, and gained further fame when their story was retold in a television drama that highlighted the company as a role model for private enterprises.

Now Zhou and Yu are famous for all the wrong reasons. Like thousands of other companies, Neoglory is a casualty of a national deleveraging campaign and a liquidity crunch that has deprived them of their cash lifeblood.

The roots of its downfall can be traced back to aggressive expansion into real estate which began with the acquisition of Zhejiang Wansha Real Estate Development Co. Ltd. and continued with the purchase of a myriad commercial complexes and hotels in the province, including the Crowne Plaza Hangzhou Thousand Island Lake and the Shangri-La Hotel in Yiwu.

The deals were funded by debt, including an increasing recourse to bond sales. In 2016 alone, Neoglory made six issuances that raised a total of 9 billion yuan. In the same year, it succeeded in getting a backdoor listing for its real-estate assets on the Shenzhen Stock Exchange, buying 62% of an A-share listed shell company for 11.2 billion yuan, whose name was changed to Neoglory Prosperity Co. Ltd. That year, the group acquired a 17.3% stake in Guangdong Nanyue Bank, a small regional bank in southern China, and also became involved in insurance, micro-lending and asset management. At the end of 2017, Neoglory's assets had surged to 77.6 billion yuan, according to data in its bond prospectuses, triple the level at the end of 2012.

But the cracks in Zhou's empire were already appearing by then as her businesses were hit by the double whammy of government curbs on real-estate development and lending, and a campaign to rein in financial risks, both of which turned off the liquidity taps that were oiling the wheels of property and finance. In the first half of 2018, Neoglory Prosperity posted a net profit of just 152 million yuan, compared with an average annual full-year profit of 1.4 billion yuan in 2016 and 2017, and started selling off assets to raise money.

Neoglory Prosperity's shares were suspended on Jan. 18 after it announced a plan to buy as much as 73.9% of Hong Kong-listed equipment manufacturer China High Speed Transmission Equipment Group in a deal worth up to 18.4 billion yuan. That shielded the shares from the rout in the stock market that saw the benchmark Shanghai Composite Index plunge as much as 25% by October. It also protected parent company, Neoglory Holdings, from margin calls on loans it had taken out using shares in the property unit as collateral. According to a July 20 statement, Neoglory had pledged about 61% of the property unit's shares as collateral for loans and Zhou's husband had also pledged a 6.9% stake.

But Neoglory Prosperity said on Nov. 1 that the acquisition plan had been scrapped, and when the shares resumed trading on Nov. 13 they plunged by the daily 10% limit for eight straight trading days, putting the pledged-loan shares at risk of being seized by lenders and possibly sold.

On Nov. 14, in an effort to calm jittery investors, Neoglory Holdings said that while the group's outstanding debts amounted to 46.9 billion yuan, its total assets stood at 81.1 billion yuan, suggesting it still had some room to dig itself out of its hole by offloading assets.

Unlike many other cash-strapped and debt-ridden private companies, Neoglory is unlikely to get any favors from the Zhejiang government or its banks in spite of the central government's exhortations. That's partly because of its expansion into property, which is on policymakers' black list, and industries that have no relation to its core business.

Other companies have been more fortunate. DunAn Group, for example, controlled by entrepreneur Yao Xinyi, employs around 29,000 workers and its businesses include precision manufacturing, advanced equipment manufacturing and renewable energy. Although it has also sunk deep into debt amounting to around 45 billion yuan, the Zhejiang government has stepped in to help. In May it called a meeting of creditors and asked all banks that had exposure of more than 1 billion yuan to DunAn to set up a debt coordination group led by Zheshang Bank, the company's main creditor, sources close to the matter have told Caixin.

“We’ll save DunAn Group, but not Neoglory,” a senior executive of a major lender told Caixin, adding that the different treatment given to the two companies stems from the attitude of local government.

Caixin has been told that the government is also concerned about Neoglory’s credibility.

NeoGlory Prosperity was fined by regulators in June 2017 for failing to fully disclose related transactions, and its 2017 earnings report was questioned by the Shenzhen Stock Exchange which raised 17 queries on a range of issues including revenue, cash flow, asset sales and acquisitions. The exchange has also raised concerns about whether Yu misused the seals of Neoglory Holdings to guarantee loans for other Neoglory subsidiaries amounting to almost 3 billion yuan.

“Neoglory has expanded too much into property and finance, and there are too many questions surrounding its credibility on information disclosure,” the banking source said.

Caixin made repeated calls for comment to the media office of the Zhejiang provincial government and the Zhejiang State-Owned Assets and Administration Commission, which usually leads local rescue efforts, but no one answered the phone in either office.

Peng Qinqin and Zhang Yuzhe also contributed to the report.