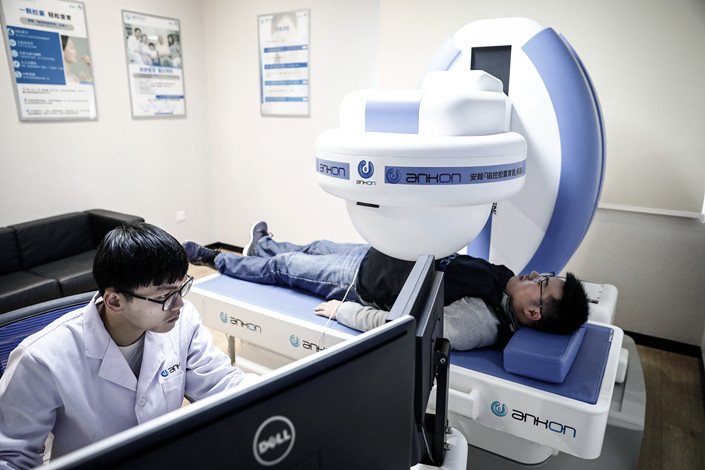 At a hospital in Wuhan, Central China's Hubei province on Jan. 3, a doctor examines the inside of the stomach of a patient who swallowed a pill-sized robot that can perform endoscopies. Photo: IC

Nearly a third of applicants to list on the Shanghai Stock Exchange’s new Science and Technology Innovation Board are biotech or pharmaceutical companies, information published by the board shows.

As an incentive to help the Nasdaq-style bourse compete with overseas rivals, it is China’s first to have a registration-based listing procedure — the international norm — which should reduce red tape. It will also allow money-losing companies to list.

The board began taking applications to list last Monday and revealed the first nine applicants at the end of last week. They included two biotech firms, one of which is China’s leading pig vaccine maker. Two drugmakers and a medical-device maker were among the eight applicants announced on Wednesday. The remaining applicants so far are mostly electronics manufacturers.

The biotech sector was among 34 industries selected by regulators as favorites to list on the new board. Others include semiconductors and integrated circuits, as well as artificial intelligence.

The biotech industry is on the rise in China and the government has decreased regulatory red tape in order to encourage innovation. Beijing has identified the sector as part of its controversial “Made in China 2025” plan, which focuses on domestic research, development and innovation.

Here’s a closer look at the first two biotech applicants eager to tap the capital market.

Based in Central China’s Hubei province, the firm secured $100 million in funding in 2017 from investors that included SB China Venture Capital, which is run by the Japanese tech conglomerate SoftBank. That valued the company at 5.96 billion yuan ($890 million).

Government subsidies helped Ankon swing to a profit of 25 million yuan in 2018 — the first time it was in the black, after a 15 million yuan loss the year before. Revenue reached 322 million yuan, up 87% from the previous year, with the bulk coming from its largest client, Meinian Onehealth Healthcare Holdings Co. Ltd., a Shanghai-based medical checkup provider.

Ankon hopes (link in Chinese) to raise 1.2 billion yuan in its initial public offering (IPO). The plan then is to invest 500 million yuan in upgrading the production lines of its core product — a capsule-sized diagnostic device that has a small magnet-controlled camera that records its trip through a patient’s gastrointestinal tract.

But some industry-watchers have expressed skepticism at the company’s plan to use proceeds from its IPO to boost the annual device production capacity to 3 million units, up from the current 1 million. That’s because Ankon only sold 170,000 in 2018, up from 85,400 in 2017.

Founded in 2001, Wuhan Keqian produces drugs and vaccines for animals, with a focus on pigs.

The company was China’s leader in pig vaccines in 2017 — the last year for which data are available. That year it reported the highest market shares of three pig vaccines — pseudorabies (28.9%), encephalitis (31%) and swine parvovirus (30.5%).

Also based in Hubei Province, Wuhan Keqian netted 352 million yuan in profit in 2018, an annual increase of 13.9%, on revenue of 730 million yuan, according to its prospectus. It reported that 95% of its revenue last year came from pig vaccines.

The company hopes (link in Chinese) to raise 1.7 billion yuan on its high-tech board debut, with a view to invest 900 million in vaccine production.

It warned investors of risks such as a potential supply glut after it expands production. This is because while 700 million pigs are slaughtered each year, farmers tend to avoid buying vaccines during slow seasons, it said.