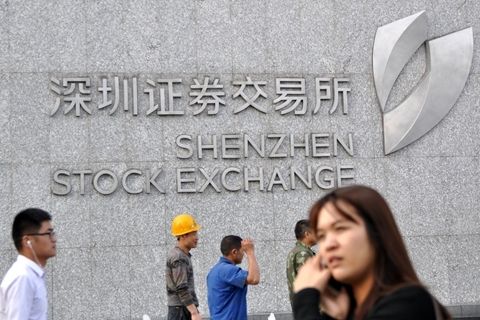 The excesses of Chinese companies’ global buying spree a half-decade ago are dragging down profits now as regulators force listed enterprises to write down the book value of assets for which they overpaid.

Annual reports for 2018 starkly show the effect. Net profits of more than 2,000 companies listed on the Shenzhen Stock Exchange declined almost 23% to 583.5 billion yuan ($86.2 billion) in 2018 even as operating revenue rose by 13.3%, according to an analysis released Sunday by the exchange’s research institute. A jump in asset impairment charges largely accounted for the lower earnings, according to the report.

Companies listed on ChiNext, a Nasdaq-style board of the Shenzhen Stock Exchange, reported the steepest decline in 2018 net profits, down 66% from 2017. Companies listed on the main board posted a 4.4% profit decline and those on the small and medium-sized enterprises (SME) board, a 32% drop.

Asset impairment charges put a significant dent in earnings as total such write-downs on the Shenzhen exchange jumped 72% year-on-year to 359.3 billion yuan. Also known as goodwill impairment, these are charges that companies record when they pay more than fair market value for assets. The sudden jump in impairment deductions from earnings reflects a wave of mergers and acquisitions between 2013 and 2015. Now, slowing economic growth and regulatory changes are forcing companies to write down the value of assets for which they overpaid.

Among Shenzhen-listed companies, Dalian Zeus Entertainment Group recorded the biggest goodwill impairment charge at more than 4 billion yuan. The gaming company, known for paying $2.35 million for a private lunch date with Warren Buffett in 2015, swung to a loss of 7.1 billion yuan in 2018 from a net profit of 1 billion yuan in 2017.

In November, the China Securities Regulatory Commission tightened disclosure rules around goodwill, urging listed companies to conduct timely impairment tests at the end of each fiscal year. Many companies have opted to take one big charge to avoid a continuing impact on future earnings, the Shenzhen exchange said in the report.

The total goodwill impairment of companies listed on the Shenzhen exchange reached 127.8 billion yuan in 2018, nearly four times that of the previous year, the report showed. Other asset impairment included losses from bad debt and declines in inventory value.

A total of 622 Shenzhen-listed firms recorded goodwill impairment charges for 2018, compared with 315 companies in 2017. Among them, 35 took more than 1 billion yuan of such deductions, compared with only two companies in 2017, data from the financial information platform iFinD showed. Most of the companies with more than 1 billion yuan of goodwill impairment loss are listed on either the ChiNext or the SME board.

In addition, 265 Shanghai-listed firms recorded a goodwill impairment loss for 2018, among which only 11 companies charged off more 1 billion yuan of such losses.