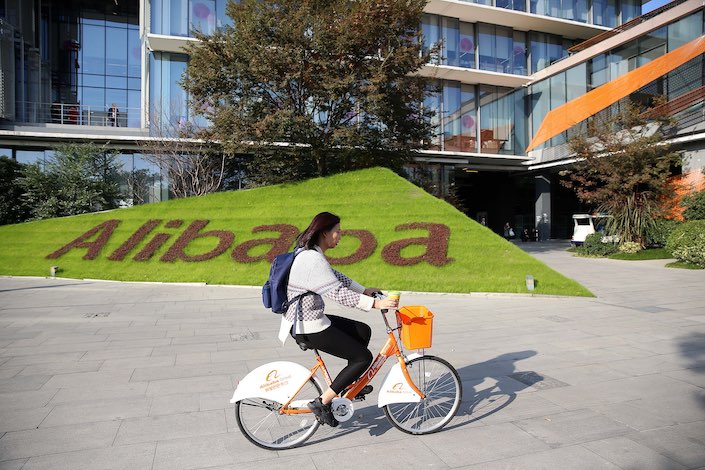 Alibaba expects sales in the current year to jump at least 33% to more than 500 billion yuan. Photo: VCG

Revenue climbed to 93.5 billion yuan ($13.6 billion) in the three months ended in March, about 1.8% above estimates as adjusted earnings-per-share of 8.57 yuan topped projections for 6.5 yuan. Alibaba expects sales in the current year to jump at least 33% to more than 500 billion yuan.

As Alibaba pushes deeper into businesses like cloud computing, it’s getting better at understanding e-commerce customers and making money from recommendations based on their preferences. The move is driving more sales than traditional search and boosting its ability to sell targeted advertising to merchants on its main Taobao platform. That is bolstering revenue growth even as escalating U.S.-Chinese tensions threaten to further dampen the world’s No. 2 economy.

“The results were really good, especially given how the macro economy hasn’t been that great," said Steven Zhu, an analyst with Pacific Epoch in Shanghai. “It’s a great sign that core e-commerce was growing strong.”

Shares of Alibaba rose as much as 4% in pre-market trading in New York. The stock had gained 28% this year through Tuesday’s close compared with a 13% rise for the S&P 500 Index. Earlier on Wednesday, rival Tencent Holdings Ltd. posted the slowest revenue growth since its 2004 initial public offering, though earnings topped estimates.

Alibaba’s revenue rose 51% to 376.8 billion yuan in the year ended March, toward the bottom of its forecast range of 375 billion to 383 billion yuan.

The core commerce business posted revenue of 78.9 billion yuan, a jump of 54%. Alibaba’s customer management revenue, which includes advertising and fees charged to merchants, grew by 31%. That’s a sign that the recommendation-based ad business is luring more merchants to spend, said Zhu.

Alibaba’s main shopping app Taobao started testing an ad product known as “super recommendations” in April, according to an April 18 HSBC report. The feature allows merchants to use text, graphics and short videos to market their wares on a number of new personalized recommendation feeds including “guess you like it,” a product display based on users’ browsing and purchase history; “good stuff here,” a shopping guide; and live-streaming showrooms.

As the U.S. and China continue to argue about trade, Alibaba is pressing ahead with its expansion and expects the local market to open up more.

“As part of the trade negotiations, China will be importing a lot more," Vice Chairman Joseph Tsai told an earnings call. “We are floating into the direction of the tide, rather than going against it.”

Revenue from Alibaba’s cloud unit surged 76% to 7.7 billion yuan in the quarter as the business becomes a key pillar of growth, with more than half the market in China.

The cloud business could post growth of 46% per year through 2022, according to Bernstein estimates. In Asia, Gartner estimated that Alibaba last year accounted for 19.6% of the Asian market for infrastructure as a service and infrastructure utility services, two of the most popular forms of cloud business. That means its regional market share rose by nearly a third from 2017, while Amazon’s fell slightly to 11%.

“Our cloud and data technology and tremendous traction in New Retail have enabled us to continuously transform the way businesses operate in China and other emerging markets, which will contribute to our long-term growth,” Chief Executive Officer Daniel Zhang said in the statement.

Ant Financial, the finance affiliate controlled by Alibaba Chairman Jack Ma, generated pretax profit about 1.38 billion yuan in the quarter, according to Bloomberg calculations from Alibaba’s earnings report on Wednesday. Ant’s Alipay and its local partners have 1 billion active users globally, it said.