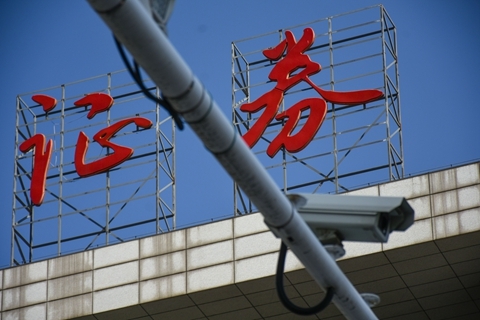 N-Securities’ net capital slumped to a negative 3 billion yuan in 2018 from a positive 580 million yuan the previous year. Photo: VCG

A senior manager of N-Securities Co. Ltd. was detained by police as a crisis in the troubled securities brokerage unfolded in northeastern China’s rustbelt province Liaoning, Caixin learned.

The government’s securities-industry watchdog initiated an on-site inspection after N-Securities showed up on the regulator’s radar for its risky dealings in bond repurchase agreements, Caixin learned. N-Securities holds more than 20 billion yuan ($2.9 billion) of assets in repurchase agreements, which sharply increased the company’s leverage and exposed it to default risks, analysts said.

Know as entrusted bond holdings, bond repurchase agreements have been widely used by many banks, securities companies and other financial institutions in China to skirt regulations on raising money for bond market investments. The practice has become the target of a regulatory crackdown after several scandals rattled the financial market.

The risks of bond repo agreements exploded in N-Securities as bond issuers defaulted amid the market downturn after hiding off the company’s balance sheet for years, market sources said.

Duan Wei, head of N-Securities’ Beijing-based fixed income department, was detained by the public security authority early this year, and the whole department has been dismissed, Caixin learned.

It is rare for the securities regulator to step into a company’s operations to the extent they did at N-Securities, suggesting regulators identified major risks in the business. N-Securities failed to meet regulatory requirements on at least four risk-control indicators — including capital leverage ratio and net stable funding ratio, which assess a company’s ability to meet its financial obligations — in December and January, the watchdog said.

The dramatic changes reflect N-Securities’ risk exposure from its 20 billion yuan of entrusted bond holdings, market analysts said. Chairman Liu said actual losses will be less than 20 billion yuan as the company has taken measures to limit losses and pursue bond defaulters, including reporting them to police.

A bond repurchase agreement allows the holder of a bond to pledge or temporarily transfer ownership to another financial institution for cash, promising to buy it back at a later date. It is a tool commonly used by bond traders to make more efficient use of their own funds.

Securities companies have driven the boom in bond repurchase agreements in spite of government-mandated limits on the use of such instruments. In an effort to skirt these rules and avoid limits on using borrowed money to invest in bonds, institutions made increasing use of entrusted bond holdings, which allowed them to keep the agreements off their books. Agreements were often informal contracts or even just verbal agreements to keep them out of sight of regulators.

The practice allowed brokerages and funds to borrow more money, increase their leverage and buy more bonds. Entrusted bond holdings worked well when bond prices were rising, but when they started to fall, risks exploded and quickly spread along the business chain.

The dangers of these instruments were especially exposed in December 2016, when Sealand Securities, a midsize brokerage firm, became embroiled in a dispute over 16.5 billion yuan of such agreements signed with more than 30 financial institutions.