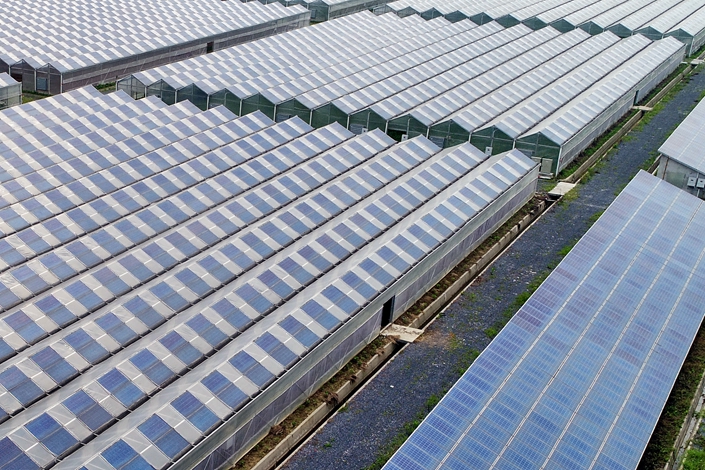 Photovoltaic-module maker Trina Solar has filed to make an initial public offering (IPO) on China’s new Nasdaq-style high-tech board, becoming the sector’s second firm to seek a domestic listing after abandoning a previous one overseas.

China now makes more than half the world’s solar panels and modules, following a rapid buildup that produced the likes of Trina, fueled by generous support from Beijing and local governments seeking to develop the industry. But now many of those companies are being forced to survive on their own as China and other countries roll back incentives aimed at promoting such renewable energy sources.

Trina and many of its peers have gone through a series of booms and busts as new capacity was built to take advantage of the government support, only to lead to oversupply and plunging prices. The current phase-out of subsidies is putting the sector under pressure once more.

Trina, which is currently profitable, has submitted a formal application to list on the new Nasdaq-style high-tech board, according to a notice dated May 16 on the Shanghai Stock Exchange’s website. The exchange said it has officially accepted the application, which aims to raise up to 3 billion yuan ($434 million) through the issue of up to 439 million shares. The new high-tech board is expected to officially launch in the next few months.

Trina said it would use the biggest portion of proceeds from the listing, around 1.39 billion yuan, to replenish its working capital. Other funds would be used to build new solar farms, as well as for expansion of its existing facilities.

Founded in 1997, Trina rose to prominence as one of China’s earliest and biggest makers of solar modules and their components. It was the world’s largest maker of modules in 2014 and 2015, but later lost the title to rival JinkoSolar Holding Co. Ltd. Its share of the global module market last year stood at about 6.8%, making Trina the world’s No. 3 player, according to data provider IHS.

The company made a New York IPO in late 2006, and briefly saw its shares nearly quadruple on high hopes for the sector. But its stock price went on to stagnate, and the company’s shares were trading well below their IPO price in 2017 when Trina joined a wave of Chinese firms privatizing from New York in search of higher valuations in their home market.

The company posted a 2018 profit of 540 million yuan on revenue of 25.05 billion yuan, both down slightly from the previous year. Like many of its peers, it has tried to diversify over the last few years into areas like solar farm development and operation in a bid to reduce its reliance on lower-margin manufacturing. In that process the company’s revenue from solar module sales has dropped from 93% of its total revenue in 2016 to 60% last year.

The IPO application makes Trina the second Chinese player to seek a relisting at home after abandoning a previous one in New York. Rival JA Solar disclosed in January it was aiming to make a backdoor listing in Shenzhen using the already-listed Tianye Tolian Heavy Industry Co. Ltd. as the vehicle. Two other offshore-listed firms, GCL-Poly Energy Holdings Ltd. and Canadian Solar Inc., are also in the process of trying to privatize from Hong Kong and New York, respectively.