By Isabelle Li and Huang Kaixi 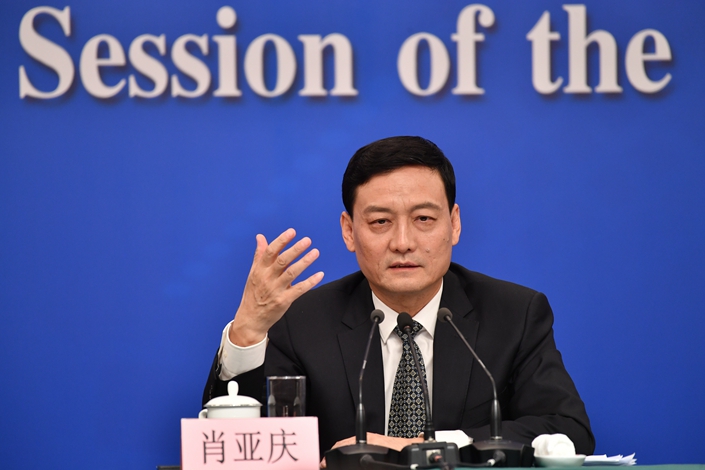 Xiao Yaqing, former director of the country’s most powerful overseer of state assets, has been named head of country’s State Administration for Market Regulation. Photo: VCG

China’s new top market watchdog is the former director of the country’s most powerful overseer of state assets.

The SAMR was established in March 2018 to oversee the Chinese market — including company registrations, food safety and drug approvals — as part of a major overhaul of the State Council, China’s cabinet, aiming at greater integration of central government agencies and better coordination under the ruling Communist Party and its military.

Xiao’s departure comes as SASAC’s powers wane. The regulator has been advancing on behalf of the central government a “mixed-ownership” reform pilot program that lets some companies under its control invite private firms to form tie-ups that include letting them take equity stakes in their state-owned partners.

By doing so, the commission’s own power is set to be reduced as part of a push to reduce its intervention in the state-owned sector.

SASAC has relinquished 43 administrative responsibilities and will continue reducing its role in state-sector businesses this year, Deputy Director Weng Jieming said in a press briefing last month, after a central government document set out a roadmap for revamping the supervision and management of state capital.

According to that document, the state asset regulators’ power should be limited to their shareholding to give private investors greater access to the state sector.

Xiao has been seen as a leading figure in the implementation of SOE mixed-ownership reform. In February, he restated the case for public and private companies working together in a keynote address at the Yabuli China Entrepreneurs Forum, becoming the first state firm overseer to attend a private-sector dominated forum.

He told this year’s national legislative meetings in March that reforms in state capital management, as well as SOE mixed-ownership reform, would be the top issues on China’s SOE reform agenda this year.

The SAMR merged the functions of three market watchdogs — the State Administration for Industry & Commerce (SAIC), the China Food and Drug Administration, and the General Administration of Quality Supervision, Inspection and Quarantine.

It also has anti-monopoly responsibilities previously shared by the National Development and Reform Commission, the Ministry of Commerce and the SAIC.

Born in 1959 in Beijing, the 60-year-old Xiao was an executive for the state-owned Aluminum Corporation of China Ltd. before moving to the State Council.

He has appeared at each National Congress of the Communist Party of China (CPC) since 2002, and is also a member of the elite CPC Central Committee.

A previous version of this story misstated Weng Jieming’s title. He is a deputy director of SASAC.