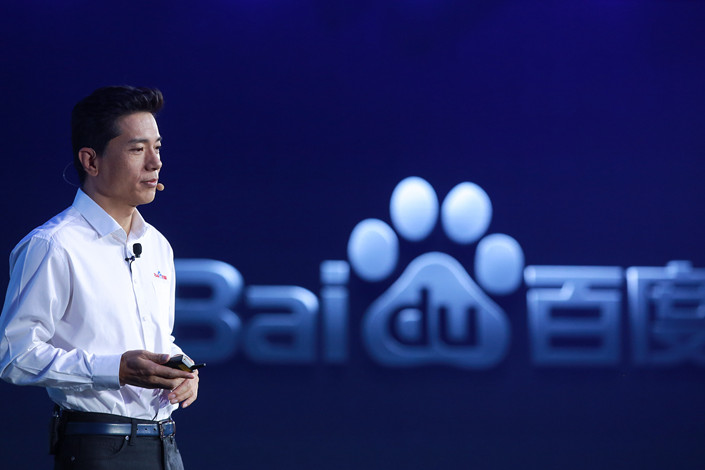 Baidu Inc. is bringing fresh blood to its management board, as the Chinese internet search giant seeks to monetize new artificial intelligence (AI) initiatives and shore up its flagging online advertising business.

The company has added a total of eight vice presidents — a mix of internal promotions and external hires — to its executive team of more than 20 over the past year. The latest move came earlier this week, when Jing Kun, general manager of Baidu’s Smart Living Group (SLG), was promoted to vice president of the whole company.

“To keep pace with the fast-changing technology environment, Baidu has adopted a young leadership development program to incubate talent for middle management and above,” said Li during last week’s earnings call to investors.

Xiang joined a long list of tech veterans who have jumped ship over the past few years. The most prominent took place last year when Silicon Valley old hand Lu Qi — who was hired to bolster the new AI initiatives from cloud business to self-driving cars — said he would step down as president and chief operating officer.

Also among the exodus was Andrew Ng, a Stanford and Google alumnus who left early in 2017 after three years at the company. Wang Jing, former general manager of the company’s autonomous driving unit left around that time too. Meanwhile, current Baidu President Zhang Yaqin will retire in October, the company announced in March.

Baidu was the gateway to China’s internet during the desktop era, but it has gradually lost its luster over the past decade as it struggled to keep pace with the rise of mobile apps. It has had trouble competing in the era of super-apps, such as Tencent Holdings Ltd.’s WeChat, which typically have their own built-in search tools. Content in such apps is also generally omitted from Baidu’s search results.

Rivals such as Bytedance Ltd. have increasingly bitten into the company’s ad business, using products such as news feeds and short video apps.

For the three months to March, the company logged a net loss attributable to shareholders of $49 million, marking the first quarterly loss since it went public in 2005.

In place of Hailong Xiang, Shen Dou, who joined Baidu in 2012, will be promoted to senior vice president to oversee the newly minted mobile business group, previously known as the search business group.

With Xiang as head of its search business, Baidu experienced its most damaging reputational crisis in 2016, when Wei Zexi, a college student with cancer, was led by a top Baidu search result to a costly and controversial experimental treatment. Wei died.

That scandal prompted Baidu to tighten control of medical advertising — a primary source of ad revenue — squeezing its bottom line.

Taking the reins will be no easy task for Dou. Walled in by Tencent and Bytedance, Baidu has tried to nurture its own online blogging platform, called Baijiahao. The strategy backfired earlier this year when a former journalist published a blog post titled “Baidu as a Search Engine Is Dead,” accusing the company’s search product of bias toward content hosted on Baidu pages. The post went viral.

As its core search business and online ad sales gradually declined, Baidu has invested heavily in new business initiatives in what it called its “All in AI” strategy.

But there are challenges ahead. None of Baidu’s smart products have yet contributed meaningfully to the company’s bottom line.