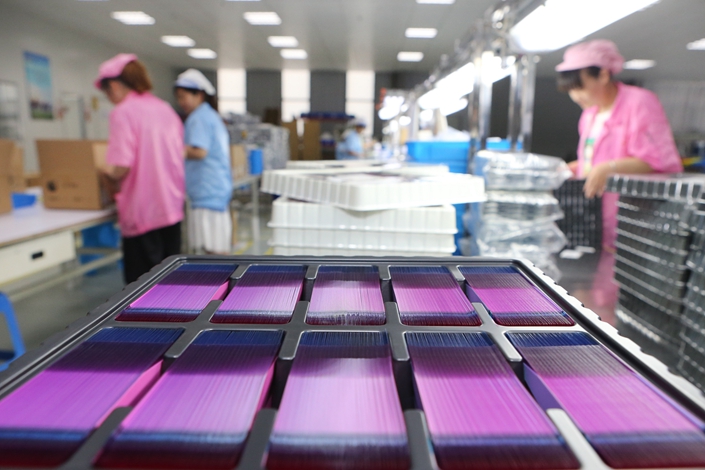 The battery has run down on another minor Chinese smartphone-maker.

Vsun Group announced on May 19 that it had filed for bankruptcy and fired its entire staff the same day.

On Wednesday, representatives of over 80 suppliers as well as dozens of recently laid-off workers went to the firm’s headquarters in Shenzhen, Guangdong province, to seek recompense. One worker told Caixin that the offices had been cleared out and multiple suppliers said they had not been able to reach the company’s executives.

Caixin has learned that the suppliers are owed at least 170 million yuan ($24.6 million). Most are domestic companies, including a few listed firms such as Skyworth Digital Holdings Ltd.

Vsun was established in May 2011 in tech hub Shenzhen, and does most of its work as a contract manufacturer, making phones for other brands. Founder Zhang Xueying is the brother of the chairman of Wingtech Technology Co. Ltd., an electronics contractor listed in Shanghai.

Vsun’s Indian subsidiary has a factory in the Indian city of Bawal, around 100 kilometers (62 miles) from the country’s capital. The company had also established a joint venture in India with Vietnamese smartphone brand Mobiistar.

In an internal memo sent to the whole company on May 19 that was obtained by Caixin, Zhang said the Indian phone brand had accumulated losses equivalent to 150 million yuan as of April.

Zhang had not replied to requests for comment by the time of publication.

The consolidation of China’s smartphone market has been squeezing the sector’s smaller players — some of which have been scaling back their ambitions while others are facing bankruptcy.

While lower-tier brands have hoped to break the dominance of sector leaders such as Xiaomi, Huawei, Vivo and Oppo — their sales have suffered since last year and analysts are not optimistic about their chances.

Shenzhen-based phone-maker Gionee Communication Equipment Co. Ltd., one of the most internationally oriented Chinese smartphone brands and among the first to break into the Indian market, also filed for bankruptcy last year.

Gionee’s liabilities amounted to more than double its current assets after it was unable to cope with intense competition, according to an April disclosure by the administrator handling the case.