By Fang Zuwang and Mo Yelin 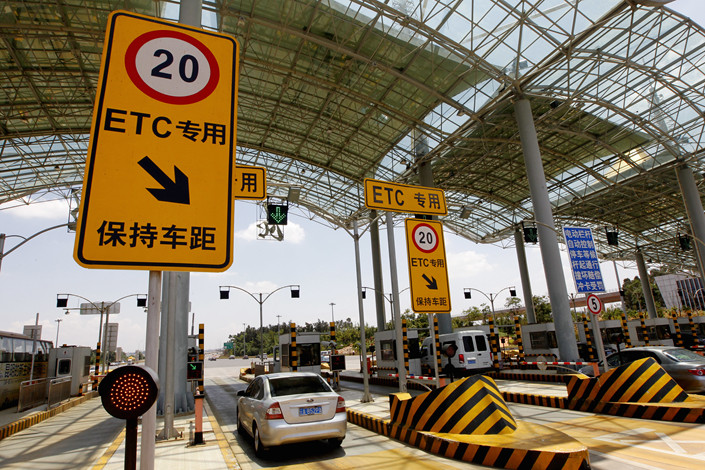 An ETC channel on the Kunming Airport Expressway in Yunnan province, on Dec. 19, 2014. Photo: IC Photo

Shares in companies that make electronic tolling systems — which allow cars to whizz past unmanned toll booths without stopping — have soared since the government announced such systems would be put into place at all borders between China’s provincial-level regions.

Over the next two years, China will eliminate all of its manned toll booths, the State Council announced last week (link in Chinese). A cashless system known as electronic toll collection (ETC) will be implemented in their place.

That means traveling across China will no longer require people to stop at toll booths between neighboring provinces, because electronic readers will communicate with linked transponders in cars that drive past, automatically charging the driver. The toll will typically be charged to an account linked to the transponder, which drivers top up.

Other details of the system have not yet been announced, such as whether cars will require transponders to cross between provinces, or whether there will be multiple ways of paying the tolls.

A report from brokerage Huachuang Securities dated May 19 predicts 140 million vehicles will install transponders under this plan. That will lead to sales of around 9.8 billion yuan ($1.42 billion), based on an average price of 70 yuan for each transponder, the report said.

Shenzhen-listed Beijing Wanji Technology Co. Ltd., which makes ETC transponders, saw its shares jump by 31% between March 5 and May 27. During the same period, Genvict Technologies Co. Ltd., a manufacturer of electronic readers for ETC systems, jumped 43% in Shenzhen.

Beijing has long promoted the use of ETC to cut highway congestion. In early 2004, the Ministry of Transportation said it would link all provincial ETC systems to improve the system’s efficiency by the end of 2015.

Some provinces and cities have moved faster than others. For example, Shanghai has said it will phase out its toll booths by December.