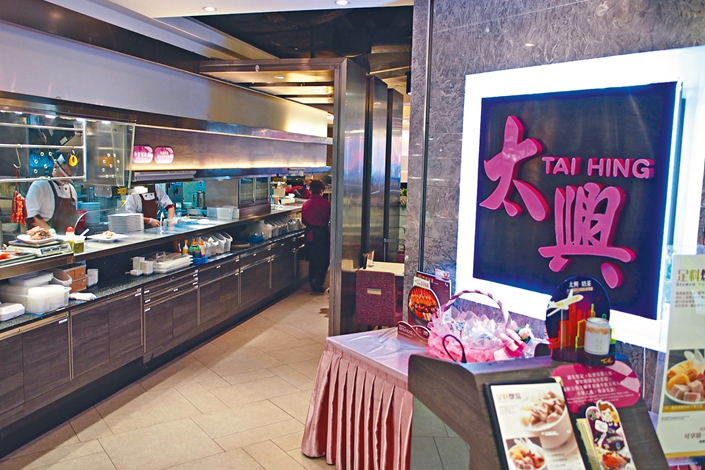 One of Hong Kong’s most famous diner chains is testing investor appetite for its brand with a planned initial public offering, as it seeks to expand across China.

Tai Hing Group Holdings Ltd. aims to raise up to HK$950 million ($120 million) through a floatation of 250 million shares, or 25% of its share capital, according to the latest copy of its prospectus filed to the Hong Kong stock exchange Thursday. It set a price range for the shares of HK$2.80 to HK$3.80.

The 30-year-old chain operates a local form of diner known in local Cantonese dialect as cha chaan teng, and is especially known for its popular roast meats and ice milk tea. Its offering follows in the footsteps of crosstown rival Tsui Wah Holdings Ltd., which raised a slightly lower HK$760 million in its own IPO in 2012.

Tai Hing’s float could test people’s hunger for such restaurant investments, following a less-than-salacious report by Tsui Wah last week. In that report, Tsui Wah, which was also founded in 1989, said it expected its profit to drop by more than 70% for its fiscal year ended March 2019. Tsui Wah’s shares tumbled 10% the following trading day.

Another peer, fast food operator Café de Coral Holdings Ltd., has also seen lukewarm demand for its shares, which are up less than 1% so far this year, lagging a 4% rise for the benchmark Heng Seng Index.

Tai Hing will use proceeds from the IPO to expand its restaurant count, which includes stores in both its home Hong Kong market and also on the Chinese mainland. It said it plans to open 36 new mainland restaurants in the coming three years, and 57 in its home market over that time.

The chain now has 63 restaurants in 13 mainland cities, including Beijing and Shanghai, and 126 in its home Hong Kong market, as well as one in Macao and one in Taiwan. Tsui Hua is much smaller with 34 outlets on the Chinese mainland and 36 in Hong Kong.

Chen Wing-On, founder of Tai Hing, said several restaurant brands under the company will expand into the mainland in the future, as he believes there’s a market there for Hong Kong-style food, also known as Cantonese food, which is popular in South China’s Guangdong province.

The company now owns nine brands, including its main Tai Hing brand, which touts char siu — thinly sliced white and vermilion roast pork, among the array of roasted meats that are its mainstay.

China Tonghai Securities said the company’s profit and revenue are expected to rise 19.2% and 14.2% annually over each of the next three years, as it is likely to expand its business and traffic with the help of its strong image and branding.

Jason Tan contributed to the report.