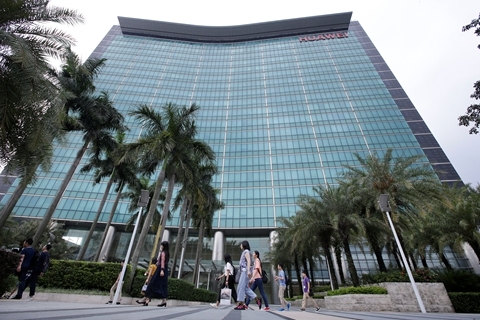 Huawei Technologies Co. is set to sell off a majority stake in its global undersea cable business, its first asset sale since the U.S. announced a ban on the Chinese telecommunications giant in May.

Shanghai-listed fiber optic cable maker Hengtong Optic-Electric signed a letter of intent to purchase a 51% stake in Huawei Marine Systems from the parent company for an undetermined amount of cash and stock, according to a statement filed Monday by Hengtong with the Shanghai Stock Exchange.

Hengtong said no formal contract was reached and the two parties have yet to settle on a price. Huawei told Caixin it was unable to provide further details beyond those in the Hengtong statement. Trading of Hengtong Optic-Electric shares was suspended Monday pending deal discussions.

Based on comments by Huawei’s founder and Chief Executive Officer Ren Zhengfei since the end of last year, Huawei is now planning to offload some noncore businesses, Fu said.

“With many countries stressing national security concerns, Huawei Marine may face difficulty to win new business,” Fu said. “So it might be better just to sell it off.”

Huawei has long been accused of espionage because of Ren’s history as a former military engineer. Earlier this month, Huawei and its 68 subsidiaries were put on an “Entity List” by the administration of President Donald Trump, effectively banning the company from doing business with U.S. suppliers. The move followed a series of measures taken by Washington targeting the Chinese company, including criminal charges and a demand to Canada for the extradition of Huawei Chief Financial Officer Meng Wanzhou, Ren’s daughter.

The Tianjin-based company builds submarine cable networks for global telecom carriers and provides project management and technical support for them. The company completed a 3,730-mile cable between Brazil and Cameroon in September. Altogether, it has implemented about 90 projects and laid more than 30,000 miles of undersea cable, according to the company’s website.

Huawei Marine contributed revenue of 394 million yuan ($57.10 million) and posted a net profit of 115 million yuan in 2018, according to Huawei Technologies’ annual report.

The contribution was insignificant considering Huawei’s 721 billion yuan of total revenue, but this part of its business has increasingly drawn international scrutiny. Some countries, the U.S. and Australia in particular, are concerned that Huawei can use its undersea cables to monitor intercontinental communications. Huawei has repeatedly denied such allegations.

In 2017, Australia’s government blocked a deal for Huawei Marine to build a 2,500-mile cable connecting Sydney to the Solomon Islands, citing cyber security concerns. Australia later granted the contract to a local company and provided financing.

In October, Global Marine’s U.S.-based parent company HC2 Holdings said it was exploring strategic alternatives, including a potential sale, for its Global Marine subsidiary. A sale would include the 49% stake in Huawei Marine owned by Global Marine.

HC2 said the move aims to reduce the company’s debt. When updating the process last month, the company said it continued to explore strategic alternatives, but there could be no assurance of a deal.

Hengtong, a privately owned company founded in 1991, provides fiber optic networks and smart electricity grids. It posted a 2018 net profit of 2.5 billion yuan on revenue of 33.9 billion yuan, according to its annual report.

Hengtong’s investor relations department told Caixin that marine communications is a main business area for the company and it’s not entering a new field through the acquisition.