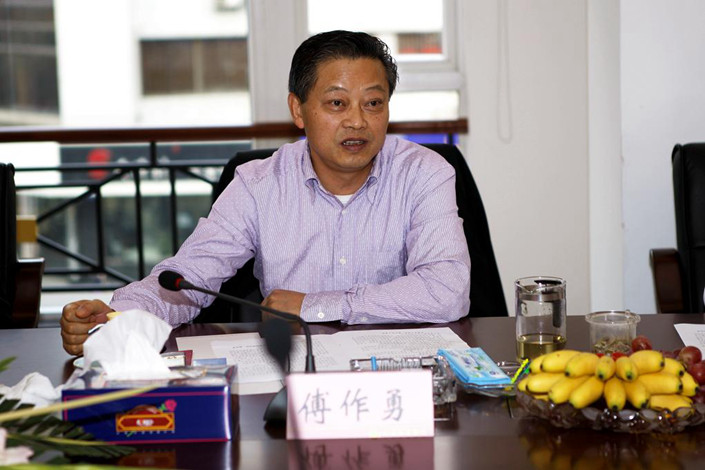 A former rural bank boss connected to a fallen senior provincial official has been placed under investigation for alleged “serious violations in law and discipline” — a euphemism for corruption.

Sources with knowledge of the matter said Fu was placed under investigation primarily because of the corruption case of Pu Bo, an official who worked in Sichuan for 36 years before getting promoted to a vice governor of southwestern China’s Guizhou province in January 2018. Pu was put under investigation in May the same year.

Fu was taken away by authorities on Thursday, the sources said. In the mid-1990s, Fu and Pu both worked in Guangan, public records show. Guangan is the hometown of the late Chinese leader Deng Xiaoping.

Fu, 62, was a Guangan native who worked in finance in Sichuan for 26 years before he retired in 2017 from Chengdu Rural Commercial Bank, which is based in the provincial capital of Chengdu.

Pu, 55, was expelled (link in Chinese) from the party and dismissed from public office in early November for allegedly taking bribes and trading power for money. He was arrested later that month and stood trial in March. The verdict has yet to be announced.

During his decades in politics, Pu quietly built up an intricate network of nepotism and secret business dealings, according to the investigation by the party’s top anti-corruption agency, the Central Commission for Discipline Inspection, which was disclosed in November (link in Chinese) by the official Xinhua News Agency.

Caixin has learned from multiple sources that Zhong Qiangang, a former head of the general office of the Sichuan branch of the China Banking and Insurance Regulatory Commission, has been assisting authorities with the Pu investigation since last month.

From 2000 to 2016, Fu worked as head of Chengdu Rural Commercial Bank and its predecessors. Since November 2011, the rural bank has been controlled by financial conglomerate Anbang Insurance Group Co. Ltd., which was taken over last year by the Chinese government. Wu Xiaohui, Anbang’s founder and former chairman, was sentenced last year to 18 years in prison for fundraising fraud and embezzlement.

Anbang has been preparing to sell its stake in the rural lender to comply with banking rules, Caixin previously reported. With total assets of 705.6 billion yuan ($108 billion), the lender ranked fifth of more than 1,200 rural commercial banks at the end of 2017, according to Caixin’s calculation based on bank annual reports.