China’s Yili Wants Olympics Dairy Sponsorship All to Itself 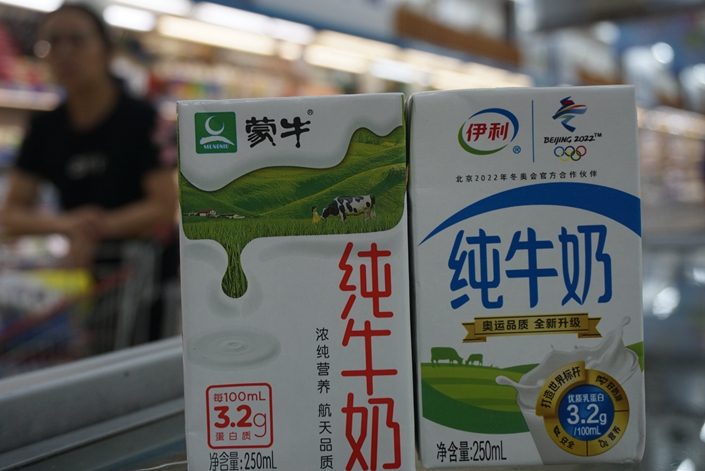 Yili and Mengniu boxes of milk in a supermarket in Hangzhou, East China's Zhejiang province on June 20. Photo: IC Photo

As far as Inner Mongolia Yili Industrial Group Co. Ltd. is concerned, there can be only one dairy products sponsor of the 2022 Winter Olympics in Beijing.

Yili, China’s largest dairy producer, has threatened to pull its sponsorship of the games because its rival China Mengniu Dairy Co. Ltd. has allegedly infringed on its status as the sole sponsor of dairy products for the 2022 Winter Olympics.

On Thursday, Yili released an open letter on its WeChat account that accused Mengniu of circumventing the Beijing Winter Olympics Organizing Committee to become a “joint global beverages partner” of the International Olympic Committee (IOC) with Coca-Cola Co.

In the letter, Yi asserted that displaying Mengniu ads at the event could mislead consumers. The letter has since been removed from Yili’s account.

Yili Vice President Wang Wei told Caixin on Thursday that the company had won the rights to be “the only official dairy partner of the Beijing 2022 Winter Olympics and Winter Paralympics” via a public bidding process with the Beijing organizing committee for the exclusive sponsorship spot. Yili also sponsored the 2008 Beijing Olympics.

A Mengniu publicity executive told Caixin that the company followed the rules to win a sponsorship, without providing details. The company did not respond to Caixin’s inquiries about how it had allegedly become an IOC global partner and whether the sponsorship is associated with Coca-Cola.

Lai Xiaolei, CEO of Best of Games Sports and Culture International Co. Ltd., told Caixin that sponsorships for the Olympic Games are divided into two levels. The first is the IOC level, or a “global partnership,” which is normally a long-term contractual relationship given to companies such as Coca-Cola and Samsung. The second is the host country level, in this case China, at which partner companies are only marketed locally and are limited to a specific iteration of the Olympic Games.

Both domestic and international partnerships must be approved by the IOC, Lai said. However, if Mengniu has indeed won “beverage partner” status, it has not in principle violated any rules. Consumers likely will not be able to distinguish what kind of sponsorship role Mengniu has, according to Lai.

Staff of the Beijing Winter Olympics Organizing Committee who wished to remain anonymous told Caixin that the sponsorship categories are exclusive. For example, because the IOC has a “nonalcoholic beverages” category, the Beijing Olympics cannot have the same category for sponsorships. But because there is no “dairy products” category for global partnerships, Yili could become the sole domestic partner in this category.

In its letter, Yili said Mengniu’s alleged partnership means that it will “have to consider whether to stop working with the Beijing Winter Olympics Organizing Committee and sever ties with the IOC after December 31, 2024.”

Mengniu’s majority shareholder is Cofco Corp., which has had a longstanding agreement with Coca-Cola since 1979. In 2000, the two companies established Cofco Coca-Cola Beverages Ltd. which produces, distributes, promotes and sells Coca-Cola products in 19 regional markets in China.