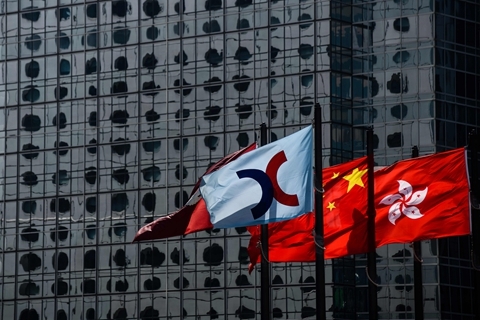 Hong Kong’s securities regulator is working with the city’s stock exchange to study introducing a marketwide circuit breaker to suspend trading in the event of wild fluctuations in the stock market.

The Hong Kong Securities and Futures Commission (SFC) disclosed the initiative Wednesday in its annual report. The regulator said it is engaging with Hong Kong Exchanges and Clearing Ltd. (HKEx) to review its volatility control mechanism in light of evolving international standards and best practices.

A public consultation will be conducted by HKEx in due course, according to the annual report. The regulator didn’t disclose further details.

A circuit breaker temporarily halts trading on an exchange or in individual stocks when prices hit pre-defined tripwires.

The first circuit breaker was put in place by the U.S. following the October 1987 global stock market crash. The collapse, which started in Hong Kong Oct. 19, 1987, affected markets around the world and has come to be known as Black Monday.

On Black Monday, the S&P Index 500 plummeted 20.5% to wipe out gains for the year. The Dow Jones Industrial Average fell 22.6%, its biggest percentage drop in a single day until that time. Hong Kong stocks fell 11.1% and then suspended trading for four days.

When the Hong Kong market reopened Oct. 26, 1987, the Hang Seng Index plunged a further 33.3%, its biggest percentage drop in a single day.

The U.S. Securities and Exchange Commission was the first regulator to put in place marketwide circuit breakers. Under current rules after several revisions, the U.S. stock market will pause trading for 15 minutes after a 7% decline in the value of the S&P 500 and then again for 15 minutes after a 13% decline. In the event of a 20% decline, the market would close for the remainder of the day. Those rules shut the U.S. market early for the only time Oct. 27, 1997, following a 7.2% plunge in the Dow.

The HKEx first launched a volatility control mechanism (VCM) in August 2016. Trading in any stock will be halted once the price surges or slumps by 10% within five minutes, giving traders a five-minute period to cool off.

The VCM hasn't been triggered since its inception. Some analysts say they worry that without a marketwide circuit breaker, the Hong Kong market could be used as an ATM when panicked investors need liquidity in the event of slumps in peripheral markets. Hong Kong is vulnerable to the effects of peripheral-market volatility, especially on Chinese mainland markets, analysts say.

Chinese mainland A-share markets tried a circuit breaker mechanism in 2016, but it lasted only four days.

Under the circuit breaker rules enacted by the Chinese government on Jan. 4, 2016, if the benchmark CSI 300 index of 300 A-share stocks on the Shanghai and Shenzhen Stock Exchanges falls 5% in a day, trading would be halted for 15 minutes. A 7% decline would trigger a halt for the rest of the trading day.

The measures, coming on top of an existing rule that limits the daily rise or fall of any stock to 10%, caused a national panic. Investors rushed to exit their positions before getting locked out by the circuit breaker. Under pressure, China’s securities regulator scrapped the circuit breaker just four days after introducing it, citing the need to maintain stability in the stock markets.

Chinese regulators so far haven’t disclosed whether they will revise the circuit breaker rules and reintroduce them in the future.