Alibaba Wants a Hema Supermarket in Every Big Chinese City

By Qu Yunxu and Tang Ziyi 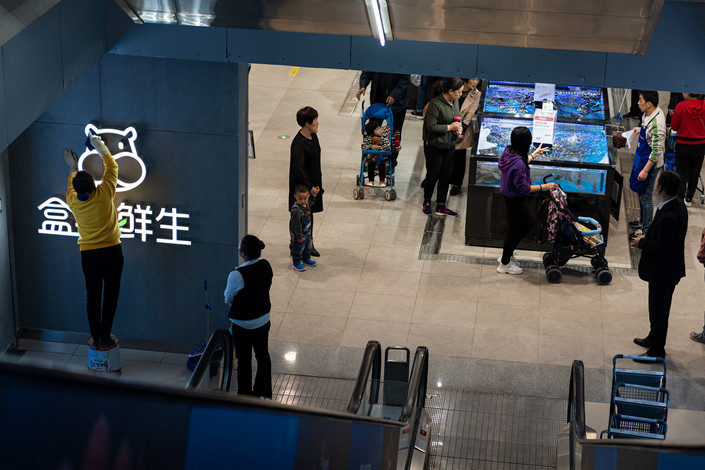 Alibaba plans to open branches of its supermarket chain Hema in every Chinese city with over 1 million residents — it says there are 200 in total — over the next 12 years, the brand’s CEO Hou Yi told Caixin on Tuesday.

China’s largest e-commerce company by market share has been rapidly expanding its brick-and-mortar presence as part of its “new retail” strategy to connect online and offline spaces. Alibaba has also set its sights on department stores and even a home improvement chain.

Since it was founded in 2015, Hema has opened 150 stores in 21 Chinese cities, according to its website. Hou didn’t say how many stores it plans to open in the next 12 years. It opened 88 new stores last year.

Visitors to Hema’s store buy food through a mobile app linked to the Alibaba-affiliated online payment platform Alipay. Customers who live nearby can also get food delivered to their home within 30 minutes of placing an order — again, via app.

However, a food quality scandal has sparked concern that the chain’s breakneck expansion could cause problems. In November, it was revealed that employees at one Shanghai Hema branch had changed the expiration dates on vegetables to make them appear a few days fresher. Hema later fired the general manager of Hema's Shanghai operations and said it would investigate all its stores.

Hou said that rapid growth is necessary to stay ahead, however. “I suspect competitors will catch up with us if we don’t run fast,” he said.

As China’s e-commerce market has become increasingly saturated, the industry’s major players — Alibaba Group Holding Ltd. and JD.com Inc. — have moved their battle for supremacy offline. JD.com rolled out grocery chain 7Fresh, which is seen as a direct challenge to Hema, last year.

JD.com said in 2018 that it plans to open 1,000 7Fresh stores in the next three to five years, through partnerships with 16 Chinese property developers, including real estate giant China Vanke Co. Ltd. 7Fresh had 10 stores by the end of 2018, according to the state-run Xinhua News Agency.

Hou said that Hema will focus on selling things in its stores for the time being, as offline sales have been growing faster than ones made online.