By Takehiro Masutomo and Mo Yelin 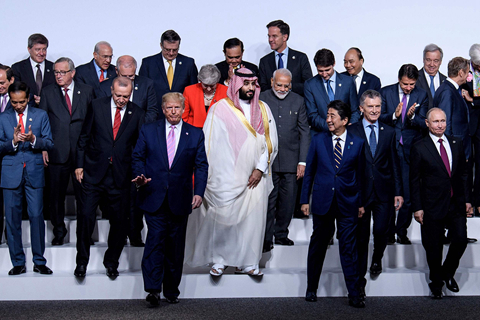 Leaders of Group of 20 ended their two-day summit in Japan. Photo: VCG

(Osaka) — The leaders of Group of 20 ended their two-day summit in Japan by releasing a hard-won joint communique, in which positions on two issues – trade and climate change – remained deeply divided.

In the communique announced Saturday afternoon, the 20 major economies stopped short of denouncing protectionism, but instead adopted weaker language that countries would strive for “a free, fair trade environment.” Though the communique said the global economy seemed to be stabilizing, it warned that growth remained low as “trade and geopolitical tensions have intensified.”

In a media briefing following release of the communique, Japanese Prime Minister Shinzo Abe said it was “hard to find a solution at one go” to the several thorny issues that divided the 20 countries.

The G-20 summit came as more attention was focused on the bilateral meeting between Chinese President Xi Jinping and U.S. President Donald Trump, who met to seek a solution to their year-long trade war. That meeting also ended with a positive result, with the two sides announcing that they would resume trade talks after negotiations broke down last month. The U.S. also said it would not impose new tariffs on Chinese imports while the talks continued.

Amid the “current situation” of trade tensions between China and the U.S., many people paid greater attention to how the results of the Xi-Trump meeting might influence other G-20 discussions, said Wang Xiaolong, the special envoy for G-20 affairs at the Chinese Foreign Ministry, in a news briefing on Saturday.

Another issue that remained a struggle for the G-20 members was the wording about climate change, with the communique adding a line that the U.S. reiterated its position opting out of the Paris climate accord. Major economies, including the U.S., signed the Paris Agreement to reduce greenhouse gas emissions in 2016 but Washington later withdrew from it.

Wang said that despite the U.S. withdrawal, the U.S. remains a contracting party to the accord and will remain a major part of the global community’s effort to address the challenges brought by climate change.

Despite the difficulties, G-20 was generally a success, said Naoyuki Yoshino, dean of the Asian Development Bank Institute. That was due mainly to a focus on other topics on which countries could still have conversations, areas such as the managing the digital economy and reducing excess plastic waste in the world’s oceans, he said.