By 2023, Most Smartphones Shipped In China Will Be 5G: Analysts

By Hou Qijiang and Jason Tan 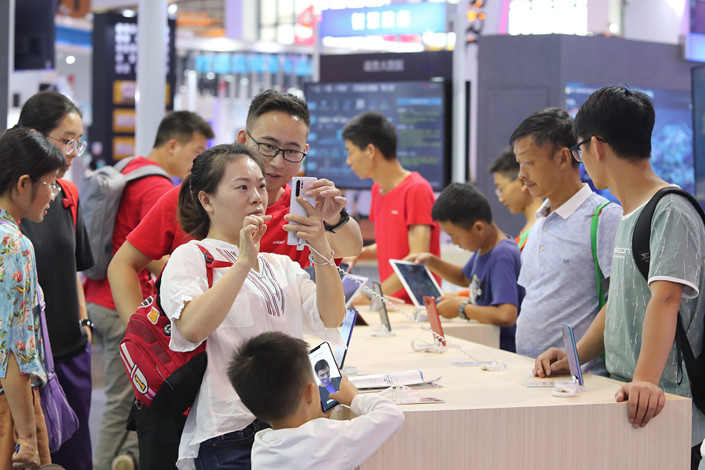 The report predicted that 5G handsets will make up the majority of global smartphone shipments by 2023. Photo: VCG

* A report from research firm Canalys predicted that by 2023, three-fifths of the smartphones shipped in China and just over half of global shipments will be made up of 5G-enabled handsets

* China will be a forerunner in 5G technology, thanks to strong government support and operators’ deep pockets, a Canalys analyst said in the report

(Beijing) — A new report predicts that by 2023 three-fifths of smartphones shipped in China will be 5G enabled, citing strong government support and aggressive strategies by wireless carriers.

In 2020, 17.5% of smartphones shipped in China will be 5G-capable, rising sharply to 62.7% by 2023, research firm Canalys predicts in analysis published Monday.

Globally, nearly 800 million 5G handsets are expected to ship in 2023 and account for 51.4% of all smartphone shipments, surpassing 4G smartphones for the first time, the report further predicted.

Greater China — which includes the Chinese mainland, Hong Kong, Macao and Taiwan — will account for 34% of global 5G smartphone shipments in 2023, followed by North America at 18.8% and the rest of the Asia-Pacific at 17.4%, it added.

China is set to be a forerunner in the deployment of the next advanced wireless technology, thanks to a strong government technology roadmap and operators’ financial capabilities, Canalys vice president of mobility Nicole Peng said in a statement.

“China is also home to many major 5G equipment suppliers and smartphone vendors, which will be responsible for an aggressive marketing push over the next few years,” Peng said.

The industry researcher estimated investment by Chinese operators in 5G would hit $5 billion this year, with around 70,000 to 90,000 5G base stations deployed across the country.

Among the country’s top three mobile carriers, “China Mobile has the broadest 5G smartphone portfolio at launch,” said Canalys analyst Jia Mo in the same statement. “Given the government has just implemented the long-awaited mobile number portability policy, all three operators will be even more aggressive with promotions to target 5G early adopters and high-value customers later this year.”

“Given the US-China tech war and Huawei's export ban, China needs to show an even stronger commitment to 5G buildout, and Huawei is keener to advertise its tech leadership in 5G and assure the global market that it can help any operator build 5G despite the US export ban,” Lee said in a note Tuesday.

Huawei, the world’s second-largest smartphone-maker, breathed a sigh of relief on Saturday when the Trump administration vowed to lift a ban on U.S. sales to the firm.

“Unsurprisingly, local Chinese brands, such as Huawei, Oppo, Xiaomi and ZTE, are 5G handset launch partners for the three operators,” Jia said, adding that South Korea’s Samsung will also use this window of opportunity to gain lost ground in the world’s largest smartphone market.