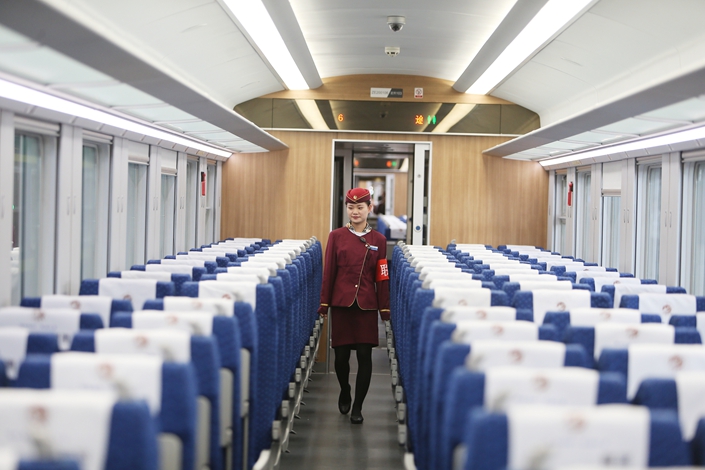 An attendant inspects the carriage of a train from Chengdu to Lanzhou on April 10, 2019. Photo: IC Photo

Activity in China’s services sector expanded at the slowest pace in four months in June as weakness in export markets offset stronger domestic new business resulting from supportive government policies and a general improvement in market conditions, a Caixin survey showed on Wednesday.

The Caixin China General Services Business Activity Index, which provides a snapshot of operating conditions in the country’s services sector, fell to 52 in June from 52.7 the previous month, the lowest reading since February. A reading above 50 indicates expansion, while a number below that signals a contraction in activity.

Weaker growth in the services sector helped drag down the Caixin China Composite Output Index, which covers both manufacturers and services providers, to 50.6 in June from 51.5 in the previous month. The Caixin manufacturing PMI, released on Monday, fell back into contraction after three months of expansion.

“Overall, China’s economy came under greater pressure in June,” said Zhong Zhengsheng, director of macroeconomic analysis at CEBM Group, an affiliate of Caixin Global. “The conflict between China and the U.S. impacted business confidence rather heavily. Although its impact on exports hasn’t been fully reflected in the short run, the longer-term situation doesn’t look optimistic. Future government policies to stabilize economic growth are likely to focus on new types of infrastructure, consumption and high-quality manufacturing.”

Trade tensions between China and the U.S. and a slowdown in domestic demand over the past year have prompted the government to implement a series of measures to cushion the impact and prevent economic growth from decelerating too steeply. The central bank has pumped liquidity into the financial system and encouraged lenders to boost credit, especially to small and midsize companies, the Ministry of Finance has cut taxes for companies and individuals, and the National Development and Reform Commission has announced policies to boost consumption. The State Council has also encouraged local governments to step up their bond sales to finance infrastructure construction.

China’s gross domestic product (GDP), a measure of the country’s economic output, rose by 6.4% year-on-year in the first quarter of 2019, the same pace as the last three months of 2018, but down from 6.8% in the same period a year earlier. The National Bureau of Statistics will release the second-quarter GDP report in Beijing on July 15 and some analysts forecast growth could slide to 6.2%. The International Monetary Fund in June lowered its forecast for China’s 2019 full year economic growth to 6.2% from 6.3%, warning that “uncertainty around trade tensions remains high and risks are tilted to the downside.”

A measure of business expectations in the Caixin services survey rebounded from a 10-month low, but “the level of optimism was still one of the least positive across the series history, as a number of firms thought that the weakening China-U.S. relationship would harm future output,” according to the survey.

The gauge of new export business for services providers fell into contractionary territory in June for the first time since September, although the contraction was marginal, according to the survey. Companies cited subdued overall global demand and tariffs as reasons weighing on new export orders.

The services sector, also known as the tertiary sector, includes finance, real estate services, marketing, transport and retailing. The sector accounted for more than 57% (link in Chinese) of China’s gross domestic product in the first quarter of this year and more than 60% (link in Chinese) of economic growth. Policymakers are counting on the labor-intensive services sector to create millions of jobs as the country’s economic structure shifts from a model dependent on manufacturing and heavy-industry to one driven by services and consumption.

But the employment index expanded at a slower pace in June for the second month in a row, and was just above the 50 level, signaling minimal additional demand for workers. Some companies said they didn’t replace voluntary leavers. The softening labor market in services industries tallies with the gauges of input prices and prices charged by companies – growth of input prices outpaced that of prices charged, indicating “that services companies remained under significant cost pressure,” Zhong said.