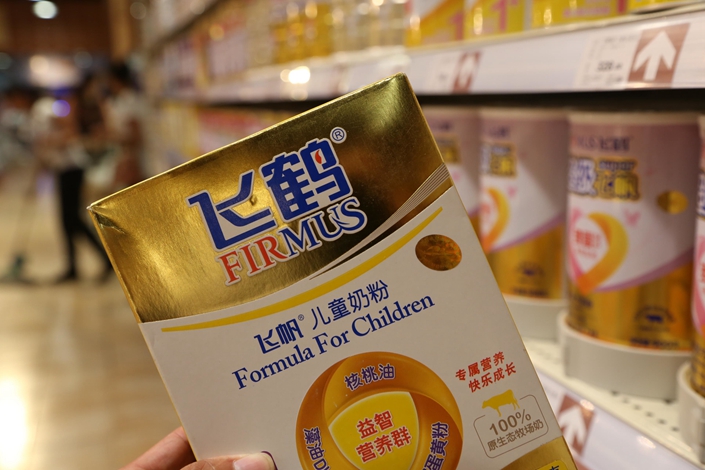 A carton of Firmus formula, a Feihe product, at a supermarket in Xuchang city, Henan province, on Sept. 12, 2018. Photo: IC Photo

China’s leading domestic baby-formula maker China Feihe Ltd. is making a renewed attempt to list its shares in Hong Kong, two years after it shelved its first listing plan after a major acquisition.

This comes on the heels of a government plan released earlier this year which called for domestic suppliers’ to grow their market share. A major food safety scandal in the sector a decade ago led many Chinese consumers to prefer imported formula.

Feihe filed for an initial public offering (IPO) with the Hong Kong stock exchange without detailing the offer size and pricing, according to the company's prospectus released on Wednesday. Bloomberg reported in March that Feihe could raise as much as $1 billion.

This is Feihe’s second attempt to float in Hong Kong. The Heilongjiang province-based company applied for a listing in May 2017, but it had to put the plan on ice while it adjusted its corporate structure following its acquisition of Vitamin World — the third largest nutritional supplements retailer in the U.S. — for $28 million in January 2018.

Feihe’s revenue has expanded threefold since its last IPO attempt, driven by fast growth in its core infant formula business. Feihe booked 10.4 billion yuan ($1.5 billion) of revenue in 2018, a 76.5% rise from a year earlier. Net profit rose 93% to 2.2 billion yuan, according to its preliminary prospectus.

According to the filing, Feihe’s higher-end products — which contributed around 75% of sales of its baby formula products last year — achieved a gross profit rate of 76.5%. That was higher than the rates of 54.8% and 53.1% of homegrown rivals Beingmate Baby & Child Food Co. Ltd. and Ausnutria Dairy Corp. Ltd., according to the companies’ data.

Song said the Chinese government has rolled out policies recently to support domestic baby formula brands, which Feihe has taken advantage of to boost its sales and grab market share from rivals. Other major domestic companies such as Beingmate and Inner Mongolia Yili Industrial Group Co. have failed to benefit as much from the policies due to issues such as stagnant sales, distribution chaos and murky information disclosure.

Feihe was the largest domestic player in 2018 with a 15.6% market share, according to consulting firm Frost & Sullivan. Feihe said it set a sales target of 15 billion yuan this year.

In May, China’s top economic planners said they hope to see domestic milk-formula firms’ total market share rise to 60%, and called for consolidation in the industry through mergers and acquisitions to increase efficiency. The current share is around 40%, analysts estimated.

This gap is the consequence of a 2008 scandal, in which the industrial chemical melamine was found in many Chinese infant formula products. Six babies died and hundreds of thousands fell ill as a result.

After Chinese customers lost confidence in domestic dairy brands, Feihe has been expanding overseas to seek new streams of revenue. Vitamin World’s income accounted for 6% of Feihe’s total gains in the first quarter this year.

In 2017, Feihe entered a partnership with Canada Royal Milk, investing C$300 million ($225 million) in a production plant in the Canadian province of Ontario.

This story has been corrected to clarify that Feihe’s higher-end products contributed around 75% of its baby formula sales last year.