Big China Brokerage Banned From Investing Its Own Money in IPOs 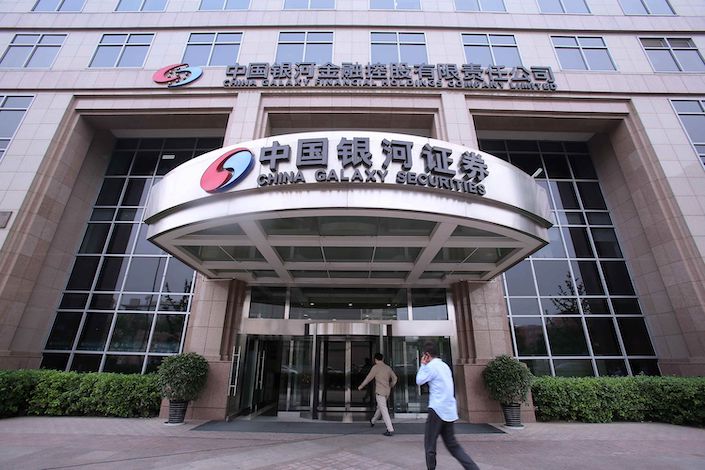 China Galaxy Securities Co. was barred from investing its own money in initial public offerings through January 2020. Photo: VCG

(Bloomberg) — One of China’s biggest brokerages was barred from investing its own money in initial public offerings after the firm’s staff failed to meet a deadline to place orders on the new trading venue for technology stocks.

Proprietary accounts of China Galaxy Securities Co. were suspended through January 2020, the Securities Association of China said in a statement Friday. The firm will demote its head of trading and has warned other employees linked to the breach of rules on the IPO of Suzhou TZTEK Technology Co., Galaxy Securities said Monday in an email.

The penalties, meted out by a self-regulated industry body under the China Securities Regulatory Commission, shows how serious authorities are on enforcing compliance as they near the July 22 start of the Nasdaq-style tech board. The project is a key to policymakers’ goal of deepening capital markets after decades of relying on state-run banks to fund the economy and could help develop a technology sector that’s being buffeted by the trade war with the U.S.

“Regulators want to make sure every link of the new tech board is rigorously implemented and foolproof,” said Lin Jin, an analyst at Shenwan Hongyuan Securities Co. “IPO subscription rules on the new board are more rigid than on the main board, so one breach will get a broker added to the blacklist.”

A bid by Galaxy Securities for shares of Suzhou TZTEK on June 27 was accepted, but traders didn’t place final orders by the designated time on the July 2 subscription date for institutional investors, the firm said.

The bid was for 6.4 million shares, according to a Suzhou TZTEK filing, worth about 163 million yuan ($24 million) based on the final pricing of 25.5 yuan. Brokerages are typically allotted only a portion of their total bid. Galaxy Securities is ranked No. 10 by market capitalization among Chinese peers.

“Money-wise, the impact of the ban is limited; it’s more a damage on their reputation,” said Wang Jiyue, general manager at Shanghai Pegasus Consulting Co. “A minor mistake like this should not happen, and it speaks about the internal risk controls of Galaxy Securities.”

Separately, the National Interbank Funding Center (NIFC) said Monday that China will suspend licenses of traders at Ping An Bank Co. and China Merchants Bank Co. for one year because of an error in repo trading July 2. The lenders conducted a transaction that resulted in an abnormal overnight pledged repo rate of 0.09%, the NIFC said.

Ping An Bank suspended the trader, reassigned responsibilities and reevaluated its practices to prevent such incidents, the lender said in an email. China Merchants Bank didn’t immediately reply to requests for comment.