Chart of the Day: China’s Private Equity Investment Cools While M&A Picks Up 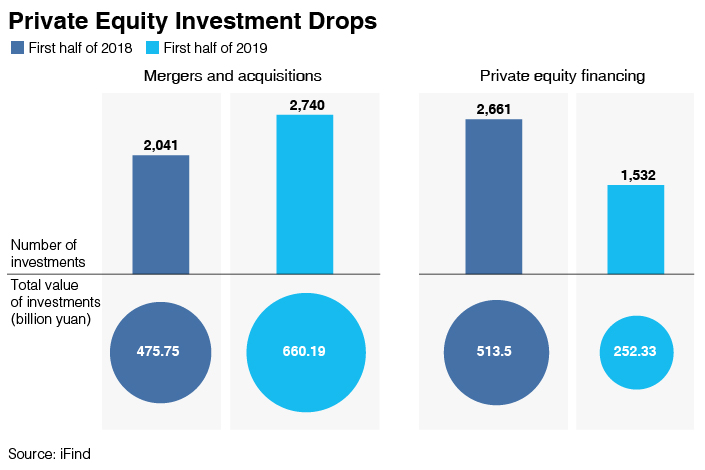 While the number and value of mergers and acquisitions (M&A) among Chinese mainland-listed firms increased year-on-year in the first half of 2019, there were fewer instances of private equity financing and the total value of such investments decreased.

This points to the continued difficulty faced by private equity firms since new rules on asset management were released last year.

In the first half of 2019, there were 2,740 M&A deals among mainland-listed companies, including those listed on the over-the-counter stock-trading platform run by National Equities Exchange and Quotations Co. Ltd. The deals were worth a total 660.2 billion yuan ($95.9 billion) — 38.8% more valuable than a year earlier — according to Caixin’s calculation based on data from financial data provider iFind.

During the same period, there were 1,532 reported cases of private equity financing, with those cases in which the value of the investment was disclosed reaching a total 252.3 billion yuan — down 50.9% year-on-year — according to Caixin’s calculations based on iFind data.

Private equity investment has been sluggish for a while, partly due to the delayed effect of financial deleveraging, but mainly as a result of low investment return rates, Liu Zhe, a deputy director at Beijing-based research firm Wanb Institute, told Caixin. A lack of quality assets available for investment has also made private equity firms wary of investing, she said.

Private equity firms have been facing difficulties since the release of the new rules on asset management in April 2018, which limits their ability to obtain money from banks, a major source of their funding.

Zhao Tiantian contributed to this report.