By Li Liuxi and Jason Tan 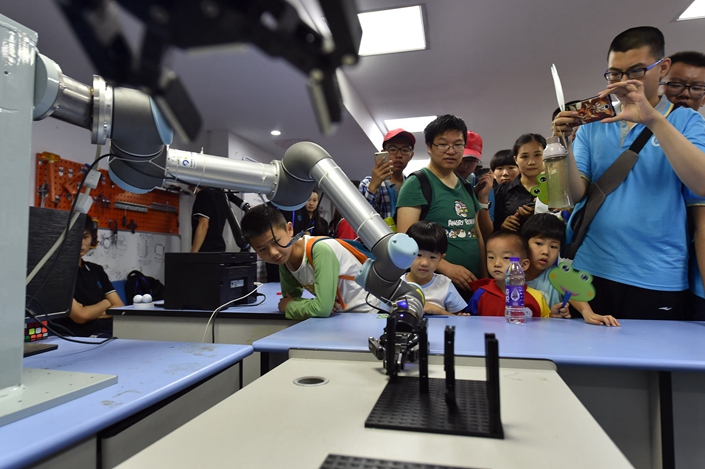 China was the world’s largest buyer of industrial robots for the sixth straight year in 2018, despite a dip in purchases from the previous year.

The country bought 135,000 robots used across industries such as electronics and automobiles, down 3.8% from 2017, according to a report released by the China Robot Industry Alliance (CRIA) on Tuesday.

China has been on a robot buying binge in recent years as it looks to take the lead in the field as part of the government’s “Made in China 2025” initiative, a grand plan to upgrade the country’s economy to produce more advanced technologies.

Since 2013, China has been the biggest robot market in the world, according to the International Federation of Robotics, a global industry organization. The world’s four other biggest robotics adopters are Japan, South Korea, the U.S. and Germany.

The slight drop last year came as the tensions between Beijing and Washington put a dent on demand for automobiles and technology products, said Lu Zhangyuan, industry analyst at Gaogong Industry Research Institute.

But Lu said the prospects still look good over the long term as Beijing continues its quest to become a world leader in the technology.

Founded in 2013, CRIA is a nonprofit organization with more than 100 members including manufacturers, research institutes, robotics associations and government-sponsored organizations in China.

Although foreign-made robots accounted for the bulk of China’s purchases last year, the country has gradually adopted more and more machines made at home. Sales of Chinese-made robotics jumped over 16% last year to 43,600, which translates into a market share of 32.23%, the CRIA said.

However, market observers said that Chinese manufacturers shouldn’t celebrate just yet — their robots are mostly targeted at the lower end of the market and much of the sales gain came because of their relatively low prices. Manufacturers have to up their technical know-how and churn out higher-quality machines to move up the supply chain and boost profitability, the CRIA said.