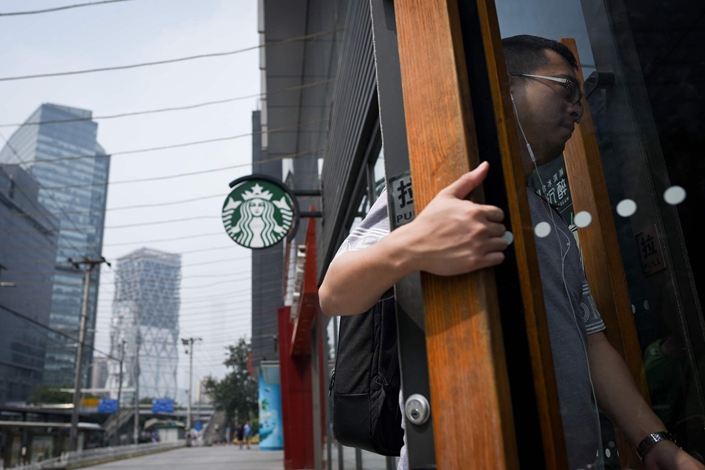 A customer walks into a Starbucks in Beijing on Aug. 2. Photo: VCG

Seating is “limited” at the store, which opened at the heart of Financial Street in Beijing on Friday, and includes an area designed for delivery drivers to pick up drinks ordered online.

Branded as “Starbucks Now,” the move is seen as a response to a coffee retail market increasingly underpinned by delivery services.

Customers can place orders in advance through the company’s app before picking them at the store, the Seattle-based coffee chain said in a statement.

But customers will still be able to place orders at the counter, unlike Luckin, which has become a serious local challenger since it was founded in October 2017. The Chinese company has billed itself as a high-tech purveyor of coffee, operating a chain of mostly minimalist shops staffed by one or two baristas. All purchases from the chain must take place through the company’s app and online orders are promised within 30 minutes.

Luckin — which listed on the Nasdaq in May — has said it wants to operate 4,500 stores in China by the end of the year, including the 2,370 stores it ran in 28 cities as of March.

Consumers can already order drinks and food from most of Starbucks’ near 3,800 Chinese stores in partnership with the Alibaba-owned on-demand food delivery service Ele.me. Starbucks Now is seen as an effort to ramp up the U.S. company’s ability to cater to the increasingly tech-savvy Chinese public.

Starbucks’ China business picked up in the second half of last year after declining in the first half when same-store sales dropped 3% between April and June. For the latest quarter through March 2019, its same-store sales in China posted growth of 3%.

The store is “a testament to our unwavering commitment to delivering innovative customer experiences through new retail formats,” said Leo Tsoi, chief operating officer and president of Starbucks China Retail.

An earlier version of this story gave the incorrect period for Starbucks’ 3% drop in same-store sale in 2018. It was between April and June.