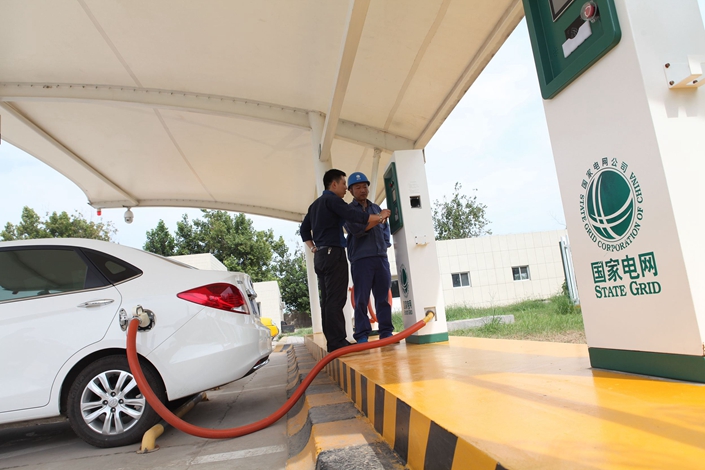 One of China’s most valuable real estate companies and the state-owned behemoth that has a near-monopoly over electricity distribution in the country are joining forces to create a network of electric-vehicle (EV) charging stations to support the country’s drive towards cleaner transportation.

State Grid Corp. of China announced that it has set up a 50-50 joint venture with the technology arm of Evergrande Group in a move designed to combine its power resources and the latter’s property management knowledge, State Grid said (link in Chinese) on its website on Saturday. The new company, Guoheng Smart Energy, has a registered capital of 180 million yuan ($26.2 million), according to the announcement.

While China has charged ahead in developing the world’s biggest EV market, the country is struggling to build the supporting infrastructure to recharge its electric fleet, with high costs, low usage and a lack of national safety standards all causing roadblocks.

Policymakers originally hoped that EV charging points could piggyback on the country’s network of 100,000 or so gas stations. But so far only around 50 gas stations have EV charging facilities, which are seeing relatively low usage as EV drivers are choosing to charge at home instead.

An insider at a state-owned EV-maker said that so far, state-owned charging stations have mostly been in public places such as expressways, but the joint venture with Evergrande will allow State Grid to plan better in residential spaces.

State Grid’s announcement of the new joint venture has been seen as a sign that progress is being made in its efforts to introduce private capital into its operations in order to diversify its cash flows and reduce its financial burden from developing national infrastructure. The company has so far struggled to encourage outside investment in its network of ultra-high voltage transmission lines.