Cryptocurrency Entrepreneur Under China Travel Ban Shows Up in U.S. 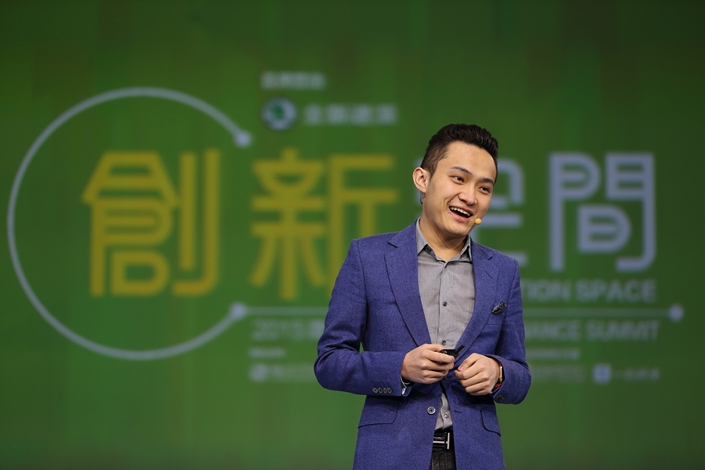 *Justin Sun’s whereabouts were unclear after he landed on a Chinese border control list in 2018, but industry sources told Caixin he has been living abroad this year

*Sun, who this week cancelled a $4.57 million charity lunch with billionaire investor Warren Buffett, tweeted a live video Wednesday that showed him in San Francisco

The controversial Chinese cryptocurrency entrepreneur Justin Sun showed that he was not in China as he went live on Twitter on Wednesday, following Caixin’s Tuesday report that revealed he was barred from leaving the Chinese mainland due to allegations including illegal fundraising.

Sun, who bid a record $4.57 million to dine with billionaire investor Warren Buffett, tweeted a live video that showed him in San Francisco, with the iconic Bay Bridge in the background. The 29-year-old founder of the Tron Foundation, established in Singapore in 2017, had previously announced that he had to cancel the charity lunch with Buffett — originally scheduled for Thursday in San Francisco — because of a bout of kidney stones.

Multiple sources told Caixin that authorities had put Sun on a border control list in June 2018 that restricts him from traveling outside the Chinese mainland due to allegations including illegal fundraising, money laundering, gambling and spreading pornography. The next month, Sun found that he was unable to go abroad when attempting to cross the border from China into another country, they said, adding that he then asked people to help find out who had issued the restrictions.

It was unclear how long the restrictions would last, but multiple sources have confirmed that Sun is currently on the list.

Under Chinese law, people involved in investigations can be restricted from leaving the mainland for one month to one year, with the possibility of extension. There have been cases where people on the list were still able to leave the mainland when extensions were not handled in time, and when they applied for the restrictions to be lifted for reasons such as illness or urgent family matters.

Sun’s whereabouts have been unclear since he landed on the list. When Caixin checked Tuesday with Raybo Tianxia (Beijing) Technology Co. Ltd., a Beijing-based internet finance company controlled by Sun that focused on building decentralized networks, its regulatory liaison said that Sun was in China, though the liaison made it clear that the answer shouldn’t been considered an official response from the company.

Caixin called Sun multiple times on Wednesday through WeChat — before he went live on Twitter. He didn’t answer the calls, but responded in text that “Caixin’s report is untrue,” similar to an earlier post on Weibo, China’s Twitter-like microblogging platform.

Before he published the video Wednesday, Sun was last seen overseas on July 1, when he attended the Asia Blockchain Summit in Taipei. In January, he publicly attended the niTROn Summit, hosted by the Tron Foundation in San Francisco. Industry sources close to Sun told Caixin that he has basically been living abroad this year.

After Chinese regulators banned both trading and raising funds for cryptocurrencies in 2017, Sun shifted his operations to Singapore with the establishment of the Tron Foundation, which launched the Tron digital token. Tron is currently the world’s 11th-largest cryptocurrency. He is also the CEO of peer-to-peer file-sharing platform BitTorrent Inc.

Earlier this month, investors who had fallen victim to a Ponzi scheme that had claimed to be connected with Tron protested at Raybo’s office in Beijing. Tron said someone falsified the company’s name to defraud the investors.

This story has been updated with additional information about Sun's actions after he was placed on China's border control list.