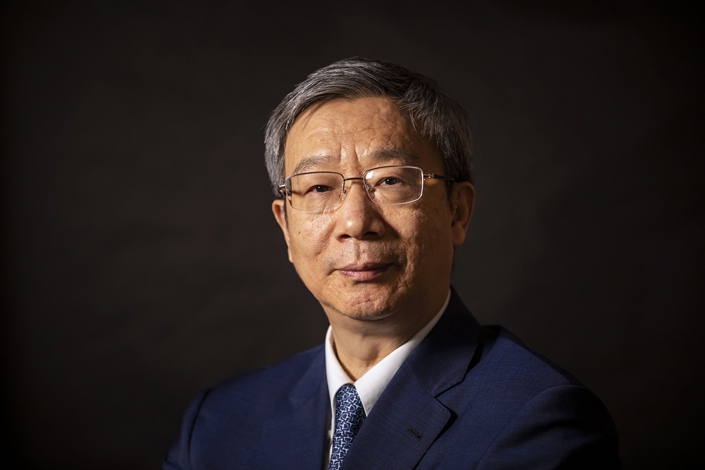 Yi Gang, governor of the People’s Bank of China, on June 7. Photo: VCG

Yi’s words mark the first time that the central banker has specified how the People’s Bank of China (PBOC) plans to unify the country’s two-track system of lending interest rates — one track is the benchmark rates set by the PBOC, while the other track is rates that are chiefly set by the market.

Although the benchmark rates are meant to act only as a reference and following them is no longer compulsory, they continue to loom large in the minds of bankers and borrowers. Replacing them with ones set by the market will give commercial banks more room to price loans, with lower rates for lower-risk companies and vice versa.

Merging the two tracks of interest rates sits at the core of China’s interest rate liberalization, which is a key reform to the country’s financial sector.

China will push banks to begin using the national Loan Prime Rates (LPRs) — which are based on the interest rates that a handful of large commercial banks charge their most creditworthy borrowers — as a reference when pricing loans, Sun Guofeng, director of the PBOC’s Monetary Policy Department, said earlier this month at a press conference (link in Chinese).

In October 2013, the National Interbank Funding Center under the PBOC launched the national one-year LPR based on the one-year LPRs used by 10 major commercial banks.

However, despite market fluctuations, the national one-year LPR has remained largely unchanged since October 2015, data from the center show. It has stayed at 4.31%, almost the same as the one-year benchmark lending rate of 4.35%.

As the central bank unifies the benchmark and market-based lending rates, it will link LPRs with the interest rates it puts on its medium-term lending facility (MLF) loans, a kind of policy lending that the PBOC created to manage liquidity in the financial system, sources with knowledge of the matter told Caixin.

The sources did not explain in detail how the bank would link these different rates, however Li Chao and several other analysts at Huatai Securities Co. Ltd. said in a note that LPRs and the interest rates on MLF loans share the same range of maturities — three-month, six-month and one-year.

The PBOC will guide financial institutions to gradually adapt to the new reference rates, the sources said.

Unlike benchmark lending interest rates, benchmark deposit rates will remain in place for a relatively long time, to avoid banks setting high rates in a fierce competition for deposits, Yi said. That kind of competition often forces banks to raise their rates on corporate loans, which would clash with government efforts to lower borrowing costs amid an economic slowdown.

Another goal of interest rate liberalization is to bring down financing costs for small businesses, according to instructions (link in Chinese) from the State Council, China’s cabinet.

Although the PBOC no longer sets mandatory upper and lower limits for commercial banks’ lending rates, some large lenders still set their lower limit at 90% of the benchmark lending rates, which was something the central bank used to require them to do, Yi said.

With China undergoing an economic slowdown, speculation has emerged that the PBOC is likely to cut benchmark interest rates to lower financing costs, particularly if the U.S. Federal Reserve cuts rates.

China didn’t follow a string of interest rate hikes by the Fed last year, and even if the Fed cuts interest rates in the future, China will continue to make decisions based on its own circumstances, Yi said.

China’s current interest rates are at a proper level and are approaching a comfortable level, Yi said, adding that “rates are cut chiefly to respond to the risk of deflation, but now China’s (consumer) price trend is moderate.”

Amid an ongoing African swine fever outbreak, the consumer price index, which measures the prices of a select basket of consumer goods and services, rose 2.7% year-on-year in June, unchanged from the growth in the previous month, which marked the highest level since February 2018, according to data from the National Bureau of Statistics.