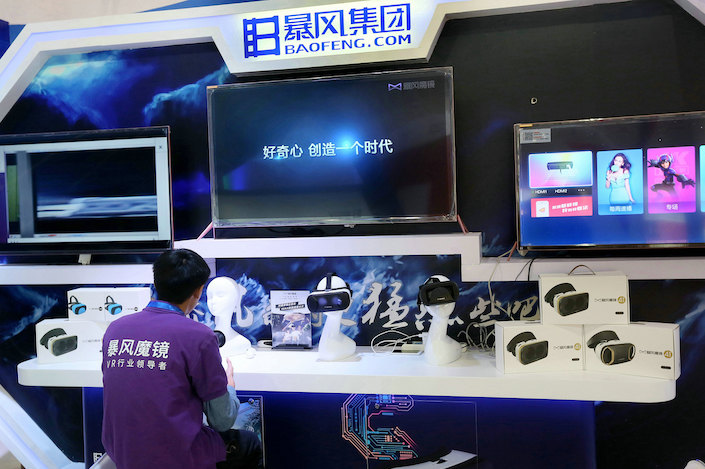 The founder of a popular Chinese online video service provider was detained by police for “suspected crimes,” the company reported.

Shenzhen-listed Baofeng Group Co. said Sunday that its President Feng Xin was taken into police custody. The company didn’t elaborate on the reason for his detainment, saying only that the relevant matters need to be further investigated by authorities.

People close to Everbright told Caixin that they are collecting more information on Feng’s detainment.

The deal was conducted through a layered leverage investment vehicle, in which Baofeng invested only 200 million yuan and other partners including Everbright and China Merchants Bank contributed the remaining funding.

Baofeng promised to pay off its partners by purchasing all of MP & Silva’s shares from the investment vehicle within 18 months after the deal was completed, but it never followed through as the British company ran into trouble soon after the acquisition was completed in May 2016.

As part of the complicated deal, Everbright Capital Corp., a wholly owned subsidiary of Everbright Securities that invested 60 million yuan in the vehicle, also signed an agreement with other senior partners promising to pay China Merchants Bank 3.5 billion yuan if the senior partners were unable to “exit the investment.”

MP & Silva, founded in 2004 by well-connected Italian businessmen Riccardo Silva and Andrea Radrizzani, had secured highly sought-after television rights for top-flight English, Italian and German soccer, as well as Grand Slam tennis and motor racing. Trouble emerged in 2017 as MP & Silva struggled to pay for many of the rights it agreed to purchase. Then in 2018, the company missed rights payments and eventually lost significant contracts.

In October 2018, MP & Silva was declared bankrupt and liquidated. Because Baofeng didn’t have MP & Silva’s cofounders sign noncompete agreements, its founders went on to form other companies and secured rights to major sports events.

Due to the deal, Everbright Securities wrote off 1.52 billion yuan of impairment losses for 2018, causing its year-on-year profit to plummet 96.57%, according to its annual report.

The MP & Silva bankruptcy has already resulted in several lawsuits among the various partners in the deal. Everbright Capital filed its own lawsuit against Baofeng Group in a Beijing court, demanding 751.19 million yuan in compensation.

Baofeng was listed by the court on a dishonesty blacklist. Feng has also been compared to Jia Yueting, founder of LeSports’ parent company LeEco. Jia has been blacklisted as a debt defaulter by Chinese regulators for failing to repay billions of yuan. Jia fled China in 2017 and has refused to return.

In the first quarter of 2019, Baofeng’s assets-to-liabilities ratio exceeded 166%. The company said in its first-half earnings outlook that it expects to record a net loss of 230 million to 235 million yuan, more than doubling the net loss a year earlier.

As of the end of last year, all of Feng’s 21.34% stake in Baofeng had been pledged or frozen.

Since mid-2017, multiple directors and executives have resigned, including the company’s finance chief. The number of employees dropped to 651 in 2018 from 1,345 in 2016.

The company’s stock, listed on ChiNext, the Nasdaq-style tech board of the Shenzhen Stock Exchange, has lost nearly all of its value, plunging to 5.67 yuan from its peak of 116.50 yuan in 2015.