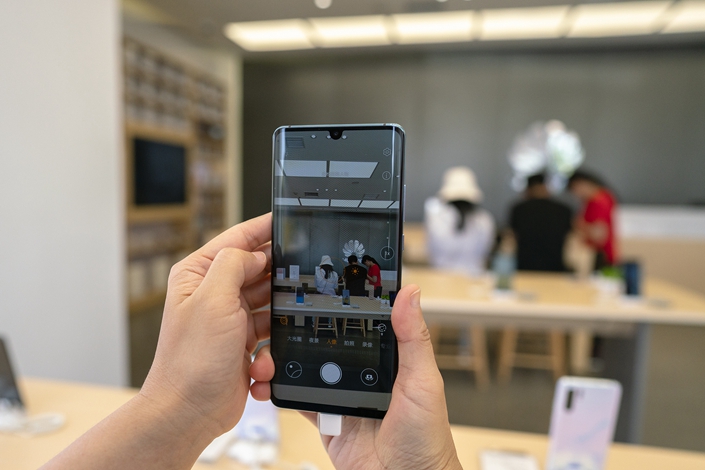 A customer tries out a mobile phone on May 31 at a Huawei store in North China’s Tianjin. Photo: VCG

Despite being buffeted by political headwinds, Chinese telecom giant Huawei Technologies Co. Ltd. rode a patriotic wave to take a record share of the country’s domestic smartphone market in the second quarter.

Huawei shipped 37.3 million units domestically in the three months ending in June, accounting for 38% of the country’s total smartphone shipments and up from a 27.6% share in the same period last year, according to industry tracker Canalys.

That’s an increase in shipped units of 31%, which came at the expense of other companies in an increasingly competitive market. Shipments by Oppo, Vivo, and Apple fell by more than 10%, while Xiaomi’s tumbled by more than 20%.

Huawei’s strong growth at home comes as it faces hostility from Washington, which has launched a global campaign to persuade allies not to use the company’s products based on charges of security flaws. In May, accusations that Huawei violated U.S. sanctions on Iran saw Washington place it on its “Entity List,” effectively blocking its access to key components and services from U.S. suppliers, such as Alphabet Inc.’s Google.

The U.S. government’s blacklisting of Huawei has to some degree led to “patriotic purchases” of its phones, said Wang Yanhui, general secretary of industry group Mobile Phone China Alliance.

Sensing this opportunity, Huawei and its distributors have become more aggressive on the home market, sector players said.

An industry source told Caixin that Huawei redirected “almost all of its overseas shipments” for its Honor 20 smartphone model and marked them for China instead. Huawei had originally planned to ship 10 units Honor 20 phones outside China this year, the source added.

In order to clear its inventory, Huawei has placed more pressure on the country’s handset distributors. Sun Yanbiao, head of the Mobile No. 1 Research Institute, said that Huawei has been demanding that a clause stipulating that sales of its phones make up half of the distributor’s total be included in business agreements.

Sun also said that Huawei has offered distributors some benefits, such as allowing them more room to set prices.

The strong growth in the Chinese market comes at a time when the company’s global sales are feeling a pinch. While the company reported Tuesday a 23.2% year-on-year increase in half-year sales to 401.3 billion yuan ($58.3 billion) that figure was lower than expected.

Huawei said in its first-half earnings report that it shipped 118 million units, with that amount roughly equally split between the two quarters. Based on these numbers and Canalys’ analysis, Caixin has calculated that Huawei shipped about 21.5 million units outside China in the second quarter, down 26% from the first quarter.

This pressure on international shipments is expected to continue in the second half of the year, with Huawei founder Ren Zhengfei predicting in an interview last month that they might decline by 40% this year.

A source at a contract manufacturer that works with Huawei told Caixin that the company has significantly cut its phone assembly orders for the third quarter, especially for phones aimed at the overseas market.

Separately, Apple on Tuesday released its financial report for the latest quarter, which showed iPhone sales in the Greater China region drooped 4%.