Wang Tao: Reform Will Go On With or Without U.S. Trade Deal 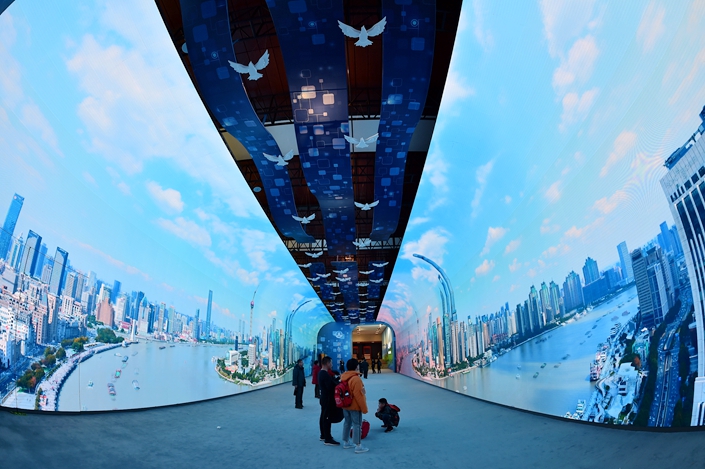 Tourists visit an exhibition about economic reform in the National Museum of China in Beijing on Feb 5. Photo: VCG

In the context of the U.S.-China trade spat, some of the important negotiation points include China's further opening of its domestic markets and carrying out structural changes related to IP protection, technology transfer and subsidies. While a trade deal has yet to be reached after many rounds of negotiations, China has already started to open domestic markets further and push for structural reforms.

Pressures from the U.S.-China trade talks may have been an important driver for these changes, but there is increasing domestic support for the acceleration of necessary reforms and market opening. We expect China to continue this process regardless of the timing and shape of any U.S.-China trade deal as it wants to demonstrate continued commitment to globalization and as reform and opening can help boost domestic confidence, improve efficiency and address structural imbalances over the long run.

What is China doing in its drive for reform and opening-up?

Further opening of domestic market for imports: China cut import tariffs four times in 2018, taking its simple average import tariff rate down from 9.8% to 7.5% (the World Bank estimates China's weighted average import tariff rate in 2017 was about 3.8%). Tariffs on automobiles and parts, daily consumer goods, some medicines, and machinery equipment and parts were lowered. China further reduced import tariffs for around 700 products in 2019. Imports also benefited from a general VAT cut implemented in April 2019. Moreover, China pledged to reduce non-tariff barriers, including by lowering administrative costs for imports, and further streamlining customs and trade processes. Approvals for certain products, including biotech and pharmaceuticals, have also been accelerated.

Additional opening for foreign investment: China approved a new Foreign Investment Law (effective from 2020), which is centred on the principal of “national treatment before entry” and a “negative list” scheme, which means foreign investment will be treated legally equal to domestic firms in areas outside of the negative list. The law also allows foreign firms to freely move their capital, profits and capital gains in and out of China in accordance with related laws. Meanwhile, China’s auto sector is set to remove foreign ownership caps by 2020 for commercial vehicle production, and by 2022 for passenger vehicle production (the cap for electric vehicles was abolished in 2018). The latest “negative list,” published at the end of June, removed eight more sub-sectors from investment restrictions, including oil and gas, urban gas pipelines and some telecommunication related services.

Reducing subsidies: To help address criticism that state owned enterprises (SOEs) enjoy easier access to credit — and implicit subsidies — the Chinese government has this year pushed for increased and cheaper credit access to the private sector and small and midsize enterprises. The People’s Bank of China, the nation’s central bank, also plans to further liberalize bank lending rates, though progress will likely be slow. On reducing explicit subsidies, the Ministry of Finance announced in May a 50% to 55% cut of subsidies on new energy vehicles while local government subsidies on them were cancelled from June. China also announced plans to phase out subsidies for wind projects by 2021.

More support for the private sector and SOE reform: Since the end of 2018, the Chinese government has pledged — and pushed for — more support to the private sector. Measures so far include lowering entry barriers in certain sectors, easing credit access, and reducing taxes, fees, and red tape. On reforming SOEs, the government plans to accelerate the establishment of state capital investment & operation companies, push for mixed ownership reforms, and increase SOE dividend payments. In addition, the State Council announced on July 10 it would accelerate the transfer of 10% of SOE shares to the National Council of Social Security Fund and local related entities. These measures are aimed at improving SOE governance and efficiency.

What are the implications?

Continued reform and opening can help boost market confidence. In 2018, apart from trade war uncertainties and credit tightening, domestic confidence was weakened by concerns about reform and policy change towards the private sector. Therefore, the government's renewed effort in market opening and structural reforms can help address those concerns and boost business confidence and market sentiment. While we think SOE reform will likely move relatively slowly given the complexities and resistance, significant progress in this area is potentially an upside risk for investors.

More competition and stronger competitiveness. Lower import tariffs, a more open domestic market, and a more friendly and equal market environment will mean more competition for domestic incumbents, which may lower profit margins and even result in the exit from the market of some domestic firms. Enhancement of IP protection may also increase business costs of some domestic firms in the short term. However, lowering tax and import costs should help lower corporate costs, more competition and better IP protection can help boost innovation and entrepreneurship, improve market efficiency and make China’s manufacturing sector, including exports, more competitive over time, in our view.

Stabilize inward FDI. Lower import and tax costs, further opening of domestic industries and the negative list scheme can help support FDI inflows at a time when some exporters are shifting supply chains away from China due to trade-war related uncertainties. The latest UBS China survey of chief financial officers found that about half of exporters affected by the trade war planned to move part of their export production outside of China this year. That said, a recent parallel survey in the U.S. actually found continued strong interest from U.S. companies in investing in China, albeit more in services. We estimate that China's inward FDI may stabilize at around $150 billion this year and next, while net FDI stays above $60 billion.

Opportunities in China's financial services opening. UBS China’s finance team believes that China's opening of its financial market and integration of foreign financial institutions into its financial system present unprecedented growth opportunities. Assuming full market liberalization and a benign competitive landscape, the team estimates that asset managers’ mutual fund management fee pool could expand five-fold to $42 billion by 2025, with assets under management potentially reaching $7.5 trillion. Brokers also have the potential to grow their institutional brokerage pool fourfold to $13 billion by 2025, with additional revenue from markets, financing and investment banking. The profit pool of life insurers could go up to $140 billion by 2030, and China is likely to surpass the U.S. and become the largest life insurance market globally in the next decade.

Of course, in the near term, foreign investors may remain cautious about some of these opportunities given the ongoing changes in financial regulations and concerns about China's high and rising leverage rates.