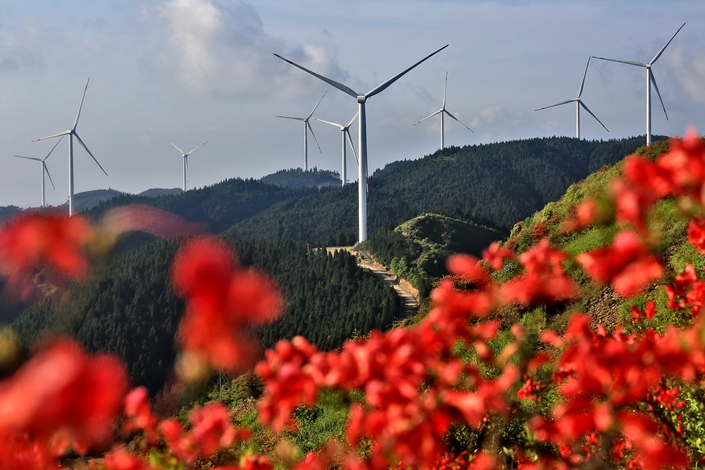 A wind farm in East China’s Jiangxi province on May 4. Photo: VCG

The breeze of marketization is blowing across China’s energy industry, with wind power generators the latest to learn that state subsidies will be reduced as the country’s state planner clears the air for a subsidy-free 2021.

New onshore wind projects that are connected to the national grid after July 1 will no longer receive the fixed payment (known as a feed-in-tariff) paid out previously, and will instead have to negotiate a price with the national grid directly, according to a new notice from the National Development and Reform Commission (NDRC).

The new rules do not phase out government-set tariffs entirely, as the negotiated price must be less than an official “guidance price,” which serves as an upper limit and is based on electricity generation costs in the area the project is based.

For the purposes of pricing, the country has been split into four zones. The guide price in wind-energy rich zones one to three — which stretch along the country’s northern border from northwestern China’s Xinjiang Uygur autonomous region to some parts of the northeastern province of Heilongjiang — will range from 0.34 yuan ($0.049) per kilowatt-hour (kWh) to 0.43 yuan per kWh. The guidance for zone four, which makes up the rest of the country, will be 0.52 yuan per kWh. These prices are 8.8% to 15% lower than a year earlier.

The prices will still be subsidized by the National Renewable Energy Development Fund, but the ceiling will fall another 0.05 yuan in 2020. After this, projects must reach “grid-price parity,” which means they must compete equally with the cost of coal power in their region.

The move is part of a package of major reforms that are sweeping China’s renewable energy system, as costs for the country’s solar and wind generators have fallen substantially and both have matured to the point that they can compete with coal generators. Solar subsidies are also being phased out, while last week the government announced 20.8 gigawatts (GW) of new projects that will compete with coal power generators without the help of subsidies for the first time.

Yet while renewable generators are becoming more competitive overall, the phasing out of tariffs will pose major challenges to generators where wind resources are relatively less rich, said Shi Jingli, a researcher at the NDRC’s Renewable Energy Center.

In Northwest China’s Qinghai province, for example, the local coal-power benchmark price is 0.32 yuan per Kwh, but the guidance price for wind will be 0.52 yuan per kWh in 2019, before being withdrawn completely in 2021. The price of wind power will have to drop markedly to be competitive.

The NDRC notice also introduced a new guidance price for newly approved offshore wind power projects. The new price, at 0.8 yuan per kWh hour, is 6% lower than the previous benchmark price. It marks the first time in five years that the price has been adjusted. The price has decreased less than that for onshore projects, as the construction cycle for offshore projects is longer, so the NDRC is more cautious about discouraging further development, Shi said.

In March, the southern province of Guangdong abandoned plans to build 32 wind power projects with a total capacity of 1.62 GW in anticipation that state subsidy support would be withdrawn.