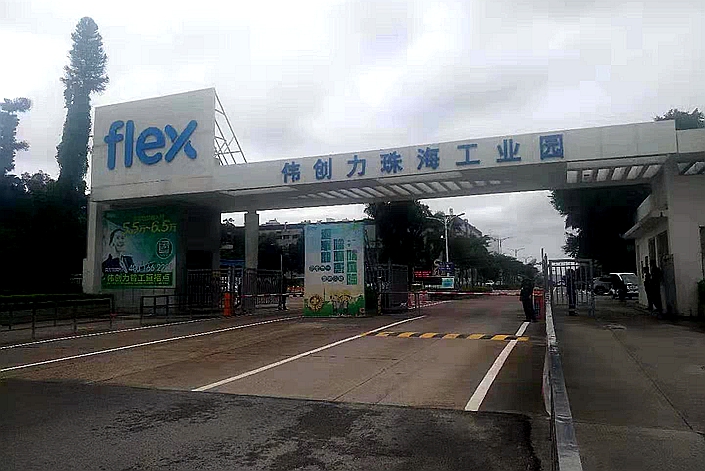 Flex’s Zhuhai factory is made up of two units — a southern unit and a northern unit — with the former entirely focusing on assembling Huawei smartphones. The southern unit can accomodate up to 18,000 workers at a time. Photo: Peng Yanfeng/Caixin

As Flex Ltd. continues to pare down its business with embattled Chinese telecom giant Huawei Technologies Co. Ltd., it has suspended more of its manufacturing capacity in China and laid off thousands, a source close to the American tech manufacturer told Caixin.

The source said Flex has partially suspended production at one of its factories in Zhuhai, South China’s Guangdong province, weeks after its factory in Changsha, Central China’s Hunan province, halted production just a year after starting up, Caixin reported last month. The two factories are two of the company’s largest facilities in China.

Flex’s Zhuhai factory is made up of two units — a southern unit and a northern unit — with the former entirely focusing on assembling Huawei smartphones. Caixin has learned from several Flex employees that the southern block — which can employ up to 18,000 people at one time — is now idle.

Flex had previously said it would reduce its business with Huawei due to “significant geopolitical under certainty,” after the Chinese telecom giant was placed on a U.S. government blacklist for allegedly violating sanctions on Iran, which strictly limits its engagement with American companies.

After entering China in the 1980s, Flex — a rival of Taiwan giant Foxconn — has built a network of factories in Chinese cities including Zhuhai, Suzhou and Shenzhen. China is one of most important markets for Flex, which generates about 25% of its total revenue from the country. Huawei is one of its key clients, making up 5% of Flex’s total revenue, according to estimates by investment bank Goldman Sachs.

The suspension of production at the Zhuhai and Changsha factories has led to over 10,000 people losing their jobs, according to the source close to Flex. The Changsha factory was mainly assembling Huawei products.

Several employees told Caixin that an internal notice about the Zhuhai southern block sent out last week said that “after deliberate evaluation of the market situation and clients’ needs, Flex has decided to provide other job opportunities within the group for those affected.”

Flex’s relationship with Huawei has been patchy of late. Huawei is currently taking legal action against Flex, alleging the later refused to return production material held in one of its China factories.

The spat began in late May when Huawei sent nearly 100 trucks to the Flex factory in Zhuhai, demanding the return of the material, Caixin understands. A source close to Huawei said Flex returned only a small portion of the material.

After more than a month of negotiations Flex returned more of the material but has retained some either in the Zhuhai factory, or in overseas facilities, Caixin has been told. Flex has told Caixin that the company is currently in talks with Huawei to seek a solution “to both sides’ benefit.”