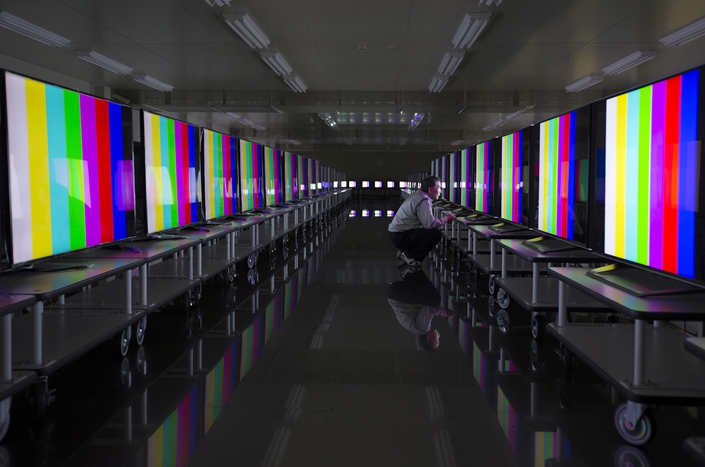 An employee inspects a Sharp Corp. television at the company's plant in Yaita, Tochigi Prefecture, Japan, in November 2015. Photo: VCG

Investors behind the 60 billion yuan ($8.52 billion) project are considering selling it, multiple sources familiar with the matter told Caixin Tuesday, with the governments of the southern city of Guangzhou and its Zengcheng district involved in the deal.

The production line, which is in Zengcheng, was built by Sakai Display Products Corp. (SDP), a venture jointly held by Japanese panel-maker Sharp Corp. and Taiwan electronics manufacturer Hon Hai Precision Industry Co. Ltd., which does business under the name Foxconn.

The project, which just held a ceremony last week marking the start of official production, is set to begin mass production next month.

Its investors are considering selling it, but the sale “is still not a sure thing at this point,” said a person working in a related department in the government of Guangzhou, which was deeply involved in the fundraising and development of the project.

Another industry insider close to Sharp told Caixin that Sharp’s head Dai Zhengwu, also a vice president at Foxconn, is searching for potential buyers. “Panel-makers including TCL and BOE are all interested in taking over,” the source said.

Caixin reached out to TCL Corp. and BOE, as well as the governments of Guangzhou and Zengcheng, but received no response by the time of publication.

In a response to Caixin, Foxconn said in that the company does not own the factory, and is unaware of the matter.

According to the Guangzhou government website (link in Chinese), the SDP 8K project emerged from a deal signed by Guangzhou and SDP in December 2016.

Founded in 2009, SDP was originally a Sharp subsidiary. In 2012, Foxconn founder Gou invested in SDP and acquired a 37.61% stake through a company called SIO, which Gou personally controls. In March 2016, Foxconn announced it had acquired Sharp. As the end of the same year, Sharp announced that SIO would increase its stake in Sharp to a controlling 53.05%.

With an investment of up to 61 billion yuan, SDP 8K was the biggest single investment in Guangzhou since the start of the reform era more than 40 years ago. The production line was designed to mainly produce 65-inch and 75-inch panels for ultra-high-definition displays.

Financially backed by the municipal government, the project has already completed 38.76 billion yuan, or around 63.55%, of the total investment, according to a release by the Zengcheng government on July 12.

But why would Terry Gou and Foxconn consider selling the project after it had secured the majority of its funding and when it’s just about ready for mass production?

Panel industry analyst Dong Min told Caixin that sluggish consumer demand in the market had been falling behind the sector’s rapidly growing 65-inch and 75-inch display panel production capacity, which is posing an increasing risk to the large-size display industry.

Besides, the ongoing China-U.S. trade tensions might have also alerted Terry Gou to be more cautious about his investments in the Chinese mainland, Dong said.