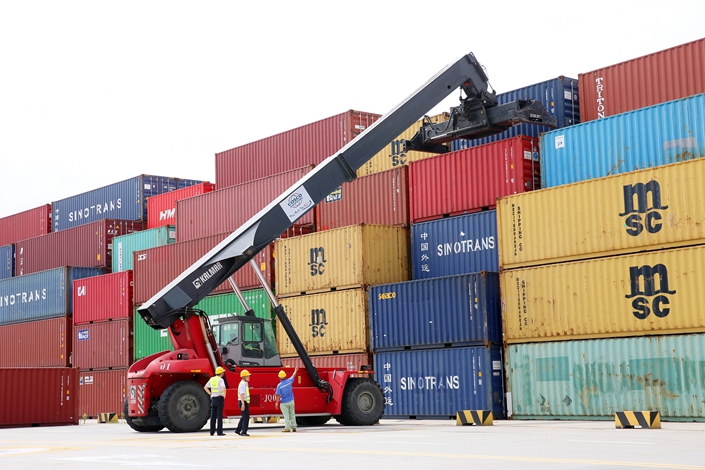 (Beijing) — China reported better-than-expected export growth in July — back when it looked like trade tensions with the U.S. were easing, government data showed Thursday. However, economists said that the momentum is unlikely to last.

China’s goods exports grew 3.3% year-on-year in dollar terms last month, the strongest growth since March, according to data released (link in Chinese) by the General Administration of Customs. The reading beat the median forecast of a 1% decrease by a Bloomberg poll of economists.

Imports declined 5.6% year-on-year in July, ahead of the Bloomberg forecast of a 9% decrease. China’s overall trade surplus logged $45.1 billion that month, up significantly from $28.1 billion (link in Chinese) a year earlier.

“Shipments in and out of China held up better than expected last month,” economists with research firm Capital Economics said in a note, adding that the better-than-expected global demand helped offset the drag from U.S. tariffs. “But a sustained turnaround still looks unlikely in the near-term,” they said.

Economists with Macquarie Group agreed. “Looking ahead, China’s export growth will likely slow more as the global economy has yet to bottom,” they wrote in a note.

Exports rebounded in July due to increased shipments to the Association of Southeast Asian Nations (ASEAN) and the European Union markets, Betty Wang, senior China economist with ANZ Research, said in a note. “Although the additional US tariffs on Chinese goods are perceived to be negative to China’s export outlook for the rest of 2019, the rising trend in China’s exports to non-US markets may act as a cushion,” she said.

China’s exports to ASEAN countries surged 15.6% year-on-year in July while those to the EU rose 6.5%, customs data show.

Since the beginning of this month, trade tensions between the world’s two largest economies have intensified. On Aug. 1, U.S. President Donald Trump threatened China with new tariffs in a tweet.

August exports may benefit from some front-loading before the potential tariffs go into effect on Sept. 1, but the growth will probably be restrained by the limited capacity of U.S. port storage facilities, the Capital Economics economists said.

On Monday, both the onshore and offshore yuan, also called the renminbi, weakened past the psychologically important 7-per-dollar mark in trading, the first time since 2008. On the same day, the U.S. government branded China a currency manipulator for the first time in more than two decades.

On Tuesday, China’s Ministry of Commerce said that Beijing will not rule out levying additional import tariffs on American agricultural products bought after Aug. 3, and that Chinese companies have suspended new purchases of these products.

“Looking ahead, exports still look set to remain subdued in the coming quarters as any prop from a weaker renminbi should be overshadowed by further US tariffs and broader external weakness,” the Capital Economics economists said.