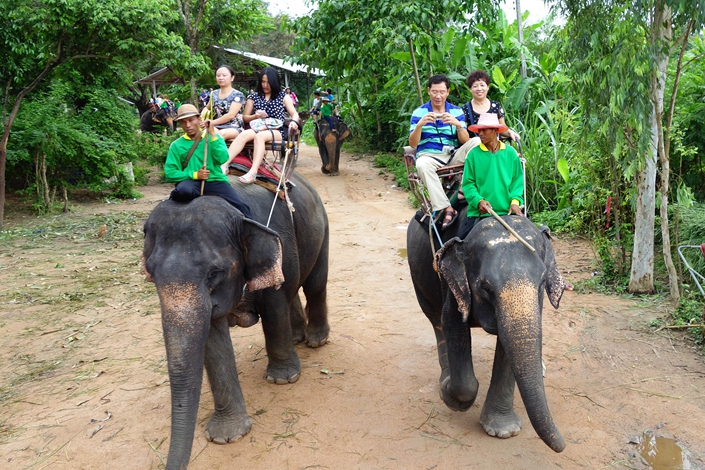 Fewer Chinese tourists are participating in harmful elephant-related activities in Thailand, a popular tourist destination, a new report has found.

In 2016, 36% of Chinese respondents said they had been on an elephant ride while in Thailand, compared with 23% in 2019, according to a three-year study on tourist attitudes to wildlife entertainment by international animal welfare nonprofit World Animal Protection (WAP).

Meanwhile, 44% of Chinese respondents said in 2016 that they had watched elephant shows involving elephants performing tricks, compared with just 18% in 2019, according to the study, which was released Monday.

China was the biggest source of tourists to Thailand in 2018, accounting for 28% of all visitors to the kingdom, according to Thailand’s Ministry of Tourism and Sports, although a boat accident off the island of Phuket in July 2018 that killed dozens of Chinese nationals combined with a strengthening baht and a dengue fever outbreak caused a slump in visits by Chinese tourists in the second half of the year.

At the same time, the Southeast Asian country is home to one of the world’s largest populations of Asian elephants, and a thriving tourism industry that has long made it lucrative for local businesses to offer elephant rides and shows. Many of these attractions depend on cruel training methods, according to WAP, which has also said elephants in Thailand and other Asian countries are living in grim conditions, including being restrained with short chains day and night, fed poor diets and kept on concrete floors in loud, stressful environments.

“Attitudes are changing amongst the Chinese public when it comes to the use of wildlife in entertainment,” WAP said on Monday. Around 37% of the Chinese people surveyed this year consider riding an elephant acceptable, down from 45% in 2017 and lower than the global 2019 average of over 40%, according to the study.

However, the illegal capture of wild elephants remains a major problem due to the low birthrate among captive elephants, and “young wild elephants have been found trapped several times this year, with some suspected to be destined for the tourist market” in Thailand as well as other Southeast Asian countries, WAP told Caixin.

Asian elephants are listed as endangered on the International Union for Conservation of Nature red list, with habitat loss and trapping among the main threats faced by the species.