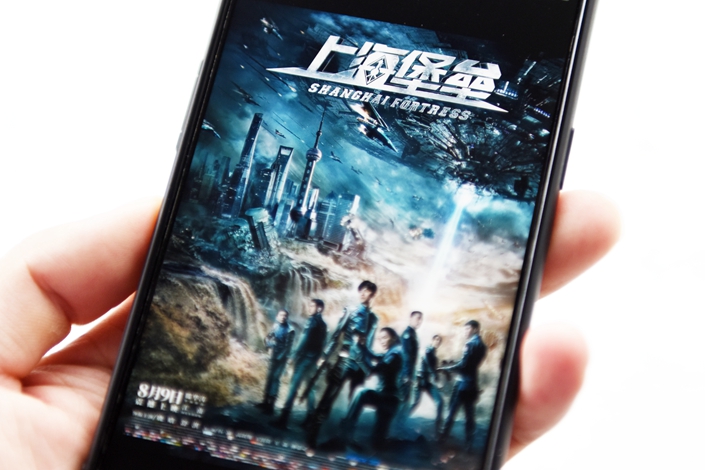 "Shanghai Fortress" tells the story of Shanghai as the last surviving city on earth following an alien invasion in the distant future. Photo: IC Photo

China’s latest big-budget sci-fi movie has bombed at the box office, disappointing those who had hoped China would become a science fiction powerhouse after the success of blockbuster “The Wandering Earth.”

“Shanghai Fortress” took in 74 million yuan ($10.5 million) during its premier Friday, coming in at No. 2 in the China box office, according to online ticketing platform Maoyan.

However, ticket sales plummeted amid withering online reviews. By Tuesday, the movie, which was made with a 360 million yuan budget, had earned less than 116 million yuan in its first five days in theaters.

That number comes nowhere near to the take of recent box office champ “Nezha,” which premiered on July 26 and raked in 1.1 billion yuan during its first five days on the big screen. As of Tuesday, the 3D animated flick had taken in 3.7 billion yuan at the box office.

Right now, it looks like the movie’s investors will have to swallow a sizable loss. Maoyan has predicted “Shanghai Fortress” will make just 125 million yuan by the end of its run, far less than the 950 million yuan in box office that its producers need to break even after splitting the revenue with theaters.

That’s bad news for anyone banking on sci-fi becoming the next big thing in Chinese movies. For years, the genre had trouble gaining traction in China due to a shortage of talent, money, technical expertise and quality source material. It only began to take off around 10 years ago, some 40 years after Hollywood released the sci-fi epic “2001: A Space Odyssey” in 1968.

Earlier this year, hopes for the genre were rekindled by the blockbuster “The Wandering Earth,” which overcame those challenges. The film earned 4.65 billion yuan during its three-month domestic run, which began on Feb. 5, according to Maoyan.

Although “The Wandering Earth” was well-received by audiences, “Shanghai Fortress” drew all kinds of flack on social media, including criticisms that its plot was incoherent, its special effects were poorly executed and its leading man, pop idol Lu Han, couldn’t act. The film received an average rating of 3.2 out of 10 from more than 140,000 people on the film review site Douban.

The online beating was enough for the director of “Shanghai Fortress,” Teng Huatao, to issue an apology. “…Today I saw that some people on the internet are saying: ‘The Wandering Earth’ opened the door to Chinese science fiction and ‘Shanghai Fortress’ closed it,” Teng wrote Sunday (link in Chinese) on China’s Twitter-like social media platform Weibo. “I am very sad. This shows that (audiences) were not just dissatisfied with the movie, but that their hopes for Chinese sci-fi were also dashed. As the director, I am ultimately responsible for this. I am very sorry.”

“Shanghai Fortress” was the first sci-fi movie directed by Teng, who is better known for romantic comedies such as “Love Is Not Blind,” one of the top grossing movies of 2011. The sci-fi blockbuster tells the story of Shanghai as the last surviving city on earth following an alien invasion in the distant future.

Chinese sci-fi films have a long way to go. One exceptional success does not mean Chinese sci-fi has taken a “qualitative leap,” according to Gong Ge’er, one of the producers and writers of “The Wandering Earth.”