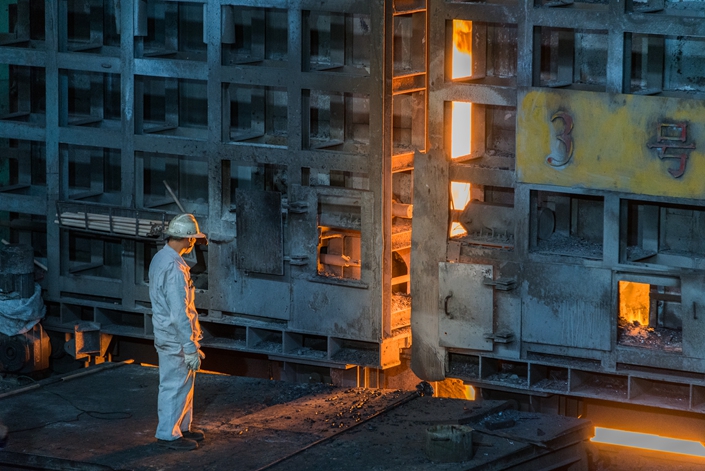 A steelworker stands next to a smelting furnace in Panzhihua, Sichuan province, on Aug. 25, 2018. Photo: VCG

A growing number of Chinese steelmakers are cutting production as prices sag in the second half of the year, ending a strong period that followed a government-led sector consolidation over the last few years.

In one of the latest moves, a group of 19 steel mills in interior China’s Shaanxi, Shanxi, Gansu and Sichuan provinces decided at a meeting Monday to collectively cut their output by 35,000 tons per day, Caixin has learned. That would amount to more than 1% of the roughly 2.8 million tons the country produces each day.

The group’s move follows a number of other similar cuts around the country. On Tuesday, six privately owned steel mills in Eastern China’s Shandong province also rolled out a plan to reduce output by a collective 400,000 tons in the near term. Six steelmakers in Fujian were preparing to pare back production, affecting an average of 7,850 tons per day, while the Metallurgical Group of Sichuan is also planning to limit production at its 11 bases, according to different industry websites viewed by Caixin.

China’s steel market has been weak in the second half of the year, with inventories growing and prices coming steadily down. That has put pressure on iron ore prices, with the main futures contract for the commodity tumbling 17% this month through Tuesday to now trade near 620 yuan ($88) per ton. That marks a sharp turnaround from as recently as early July, when iron ore futures touched a five-year high as demand was still strong.

Following the cuts this week, related futures prices rose on anticipation that prices could soon stabilize. Industry analyst Xu Xiangchun said steel production was relatively high in the first half of the year, reaching 107 million tons in June, up 12.6% from a year earlier. The new cuts could help to improve negative sentiment now in the market, but producers probably need to cut output by 10% before inventories will start to fall, Xu said.