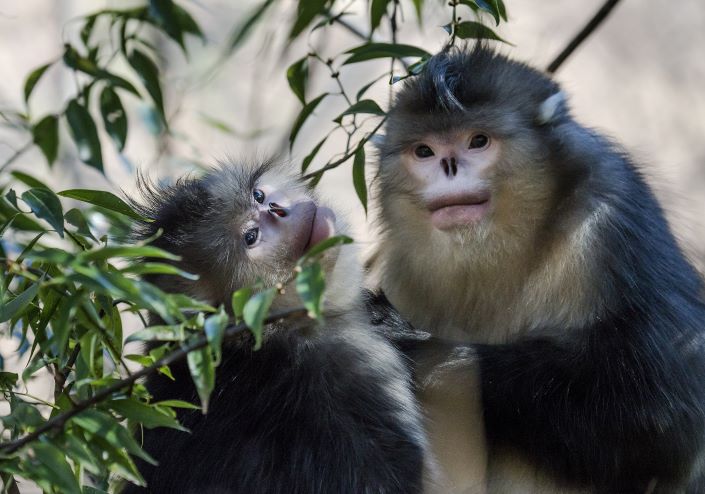 Throughout much of the 20th century, the Yunnan snub-nosed monkey was the stuff of legend. While they had been spotted and captured by French explorers in the 1890s, none were observed alive in the wild for decades afterward.

Then, in the 1980s, a scientist by the name of Long Yongcheng, then working at the Kunming Institute of Zoology of the Chinese Academy of Social Sciences, glimpsed the elusive species near the remote village of Liju, in southwestern China’s Yunnan province.

In the following years, Long and local villagers tracked the monkeys and studied their habits. In 2003, after joining environmental protection group The Nature Conservancy (TNC), he returned to the village to carry out further research.

Now the population of snub-nosed monkeys is growing steadily. In the last 20 years, the total number has doubled to around 3,000, according to the latest data. Yet challenges remain, including the destruction and fragmentation of their forest habitat, animal trafficking, and costly and inefficient conservation work.

Local poverty alleviation work, too, is often at odds with conservation. Snub-nosed monkeys live in poor, rural areas of Yunnan, near communities that fell trees for firewood and other uses. Mount Laojun, which stands roughly in the middle of the monkeys’ 20,000-square-kilometer range, currently has no official nature reserves for the monkeys, although other protected areas do exist in Yunnan and the Tibet Autonomous Region.

In this upcoming story from Caixin Weekly, reporter Zhang Zizhu explores how villagers in Liju are trying to combine development and conservation to protect the endangered snub-nosed monkey.