By Yang Ge and Bao Zhiming 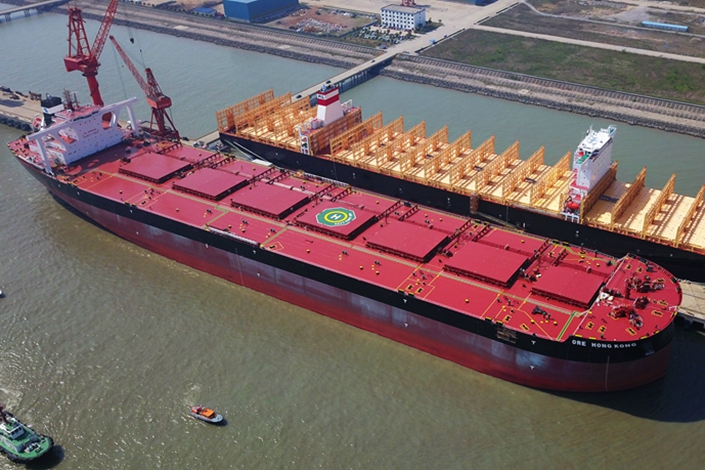 Shares of China’s largest private shipbuilder rebounded modestly on Friday, but were still well below their earlier levels, in resumed trading after the company confirmed its chairman was assisting in an unspecified government investigation.

In a clarification announcement prior to the trading resumption, Yangzijiang Shipbuilding (Holdings) Ltd. said Ren Yuanlin, its executive chairman, was “currently assisting in a confidential investigation carried out by certain PRC governmental authorities,” and was granted a leave of absence from the company starting Aug. 9. During Ren’s absence, his duties will be assumed by his son Ren Letian, who is also the company’s chief executive officer.

Yangzijiang added that based on its own inquiries, it did not believe that Ren was the actual subject of the investigation, and said its business and operations “are unaffected by the investigation and Mr. Ren Yuanlin’s leave of absence.”

A knowledgeable source told Caixin that Ren was assisting in an investigation involving Liu Jianguo, a party leadership member of the standing committee of the people’s congress in the city of Changzhou in East China’s Jiangsu province. Ren and Liu had previous contact through their involvement in a local charitable organization that was established in 2012, the source said.

On June 3, the province’s anti-corruption watchdog said that Liu was involved in serious breaches of discipline, a common euphemism to describe corruption.

China has been waging a war against corruption under most of the administration of current President Xi Jinping, and the occasional disappearance of people to assist in investigations isn’t uncommon. One of the highest profile instances saw Guo Guangchang, chairman of private equity giant Fosun International Ltd., disappear for several days in 2015, with the company later explaining that he had been assisting in an unspecified investigation.

Prior to its Wednesday announcement explaining Ren’s absence, Yangzijiang shares had lost about a quarter of their value since early August, when rumors began to circulate. Its shares were suspended on Aug. 8, and plunged another 17% when trading resumed on Thursday. They bounced back slightly on Friday, but at current levels are still down by about a third from their earlier levels.

Born in 1953, Ren became head of the company that would eventually become Yangzijiang in 1997. The company did its IPO in Singapore in 2007, becoming China’s first privately owned shipbuilder to go public overseas.