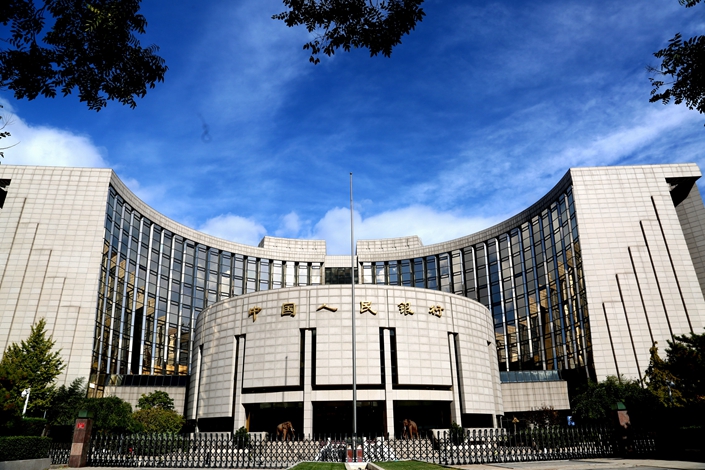 The People's Bank of China in Beijing on July 26. Photo: IC Photo

China’s plans to reform its lending interest rates to make them more market-oriented and cut borrowing costs could benefit bigger, state-owned borrowers the most, economists said, after the central bank unveiled further details about its efforts to merge its two tracks of interest rates on Saturday.

The People’s Bank of China (PBOC) said in a statement (link in Chinese) that the benchmark lending rates set by the bank will be replaced with new national Loan Prime Rates (LPRs) — which will be based on the interest rates that a basket of 18 commercial banks charge their more creditworthy borrowers — as a new reference point for lending.

The banks’ lending interest rates will be linked to the interest rates on the PBOC’s lending to the banks through open-market operations, giving the central bank a way to still affect the cost of borrowing in the economy.

The PBOC said (link in Chinese) the goal of the move is to make the national LPRs a more market-oriented mechanism so as to lower borrowing costs in the real economy.

It also barred commercial banks from setting any implicit floor on lending rates. Previously, most banks would not offer loans for less than 90% of the PBOC benchmark rates.

In October 2013, the National Interbank Funding Center under the PBOC launched a national one-year LPR based on the one-year LPRs used by 10 major commercial banks.

Analysts hold different views on whether the new reforms will lead to loan rates actually being lowered. Economists at Nomura said “the new LPR regime and the PBOC quasi-policy rate cuts could favor big state-owned borrowers while delivering few benefits to small and medium-sized enterprises (SMEs),” as looming growth headwinds and financial risks have been making banks more risk averse.

Banks may need to do some “national service” by lowering their average loan rates, but they may try to make up for their lower profits by increasing the price of riskier loans to the private sector and SMEs, the Nomura economists said.

Economists at China Merchants Securities also think that if the implicit floor on lending rates is eliminated, the borrowing costs of big companies will probably decline substantially. But more policies will be needed to lower the borrowing costs of SMEs, which are relatively high risk and have little bargaining power.

The new national LPRs are set to be launched on Tuesday and then published on the 20th day of every month. The rates will be set based on the LPR quotations submitted by 18 commercial banks. The central bank has added eight medium and small banks, including two foreign-funded banks, to the existing list of 10 nationwide banks that are allowed to submit quotations to the previous national one-year LPR.

A tenor for five-year and longer-term loans will be added to the existing one-year LPR, which will provide a reference for banks when setting rates on long-term loans such as mortgages.

The 18 commercial banks will set their own LPRs by adding multiples of five basis points to the interest rates of open-market operations undertaken by the central bank, chiefly the medium-term lending facility (MLF), a kind of policy lending tool that the PBOC uses to manage liquidity in the financial system. A basis point is one-hundredth of a percentage point.

By linking the 18 banks’ LPR quotations to the MLF, the PBOC will be easily able to affect loan interest rates, said Ma Jun, a member of the PBOC’s monetary policy committee, in an interview with state-run China National Radio. “In the future, if policy interest rates decline, the (actual) loan rates will decline accordingly.”