Chinese Investment in Vietnam Picks Up Amid U.S. Trade War 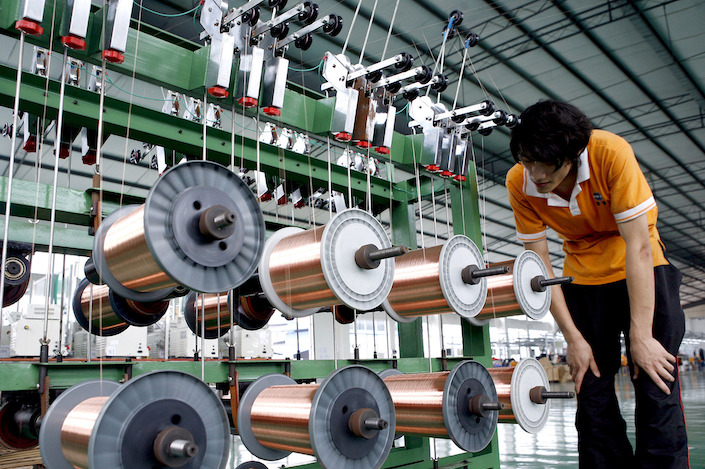 A survey by Standard Chartered PLC showed that almost two-thirds of respondents were actively considering moving capacity out of China. Photo: VCG

Under pressure from rising production costs in China, manufacturers have been scrambling to locate elsewhere. Vietnam has emerged as one of the recipients as China speeds up investment in the Southeast Asia neighbor.

During the first seven months of this year, pledges of foreign direct investment (FDI) in Vietnam from China jumped 134% to $2.48 billion, moving China up to the third-biggest FDI source from fifth in 2018, data from the Foreign Investment Agency of Vietnam showed. Total FDI in Vietnam declined 11.9% from the same period last year to $20.3 billion.

The FDI total reflects only investment commitments. Actual disbursements were just about half of the pledged totals. Vietnam didn’t disclose a breakdown of the disbursement figure.

China hasn’t released official FDI data for Vietnam so far this year, but analysts said they have seen increasing cases of Chinese manufacturers moving to Vietnam.

The acceleration in manufacturer relocations is related to the trade war with U.S., said Zhang Ming, a researcher at the Chinese Academy of Social Science, a state-backed think tank in Beijing.

The China-U.S. trade frictions are expected to be long-term and complex, and Vietnam has a relatively mature industrial structure among the 10 countries of the Association of Southeast Asian Nations (ASEAN), so moving to Vietnam has been a logical option for many Chinese companies, Zhang said.

A survey released in July by Standard Chartered PLC showed that almost two-thirds of respondents were actively considering moving capacity out of China, and about 70% of them said the U.S.-China trade dispute made them consider such a move more actively.

Vietnam and Cambodia are the top preferred destinations, with “better labor supply” the most-cited reason, the report found.

The survey also showed that those considering relocating from China are mostly low-end producers in sectors such as textiles and garments, consumer discretionary and electronics packaging and assembly.

Zhang said he found that the shifting of apparel and footwear makers to Vietnam was already common when he did field research in the country last year. In addition to global brands like Nike and Adidas, some Chinese domestic textile and apparel companies are also moving to Vietnam, he said.

Zhang raised the concern that some high-end industries, such as electronics and machinery, will also move to Vietnam. He said there are already signs of such shifting.

But Standard Chartered said in a 2017 report that high-end manufacturers tend to increase capital expenses and automation investment to improve productivity when facing rising labor costs.

The Pearl River Delta area in Guangdong province has established a competitive industrial chain in sectors such as electronics and telecom equipment, which is hard to move overseas altogether, Standard Chartered said.

Some also pointed out that Vietnam’s much smaller economy doesn’t have enough capacity to absorb the sudden exodus from China.

Vietnam, roughly the size of China’s Guangdong province, had a gross domestic product (GDP) of $241.2 billion in 2018, less than one-fifth of Guangdong’s GDP.

A report by Southwest Securities said China’s manufacturing size is about 10 times of that of India and more than 100 times that of Vietnam, making it impossible for any ASEAN country to take over.

If the China-U.S. trade war continues to escalate, it’s more likely to result in a contraction of global trade than in industrial relocation, the report said.