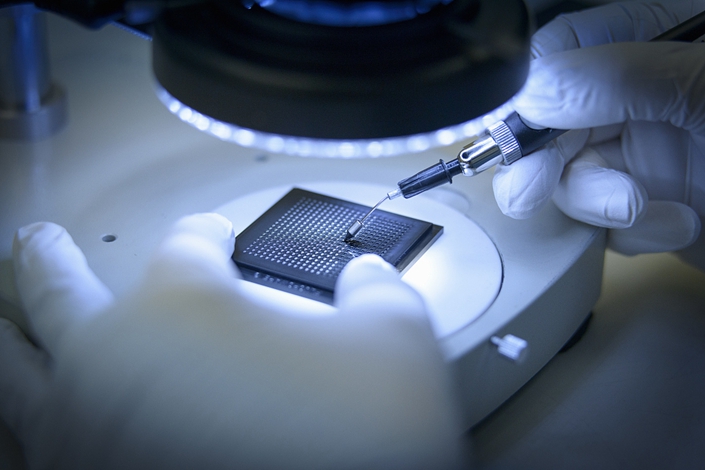 State-owned chipmaker Tsinghua Unigroup Ltd. signed a deal Tuesday with the Chongqing municipal government to build a facility that will design and manufacture memory chips in the southwestern Chinese city.

The plant, which will focus on DRAM chips — one of two major classes of memory chips — will include a factory, a science park and a research and development center.

The factory itself will mainly produce 12-inch DRAM chips and is expected to begin production in 2021, the company said.

As part of the agreement, Unigroup will set up the headquarters of its new memory chip-focused business group in Chongqing. It announced the formation of the internal DRAM unit last month.

Based out of top university Tsinghua in Beijing, Unigroup is a prominent producer of the other dominant type of memory chip — a type of flash memory called NAND.

NAND and DRAM are both commonly used in devices such as smartphones and PCs. NAND chips don’t need power to retain data and are regularly used to make computer hard disks and memory cards. DRAM chips, on the other hand, can only retain information when they have power, but run faster, are cheaper, and are used widely in digital electronics.

Although the applications of NAND are growing faster than DRAM, the company has decided to work on both because they are “strategically important” for China, Tsinghua Unigroup Chairman Zhao Weiguo previously told Caixin.

Beijing has thrown billions of yuan at Chinese companies with the goal of making the nation technologically self-sufficient. Despite the country’s leading status as a global manufacturing hub, it relies on imports of high-tech components it cannot make.

Analysts estimate that China is still at least three years behind the world’s leading NAND-makers, and at least five years behind when it comes to DRAM.