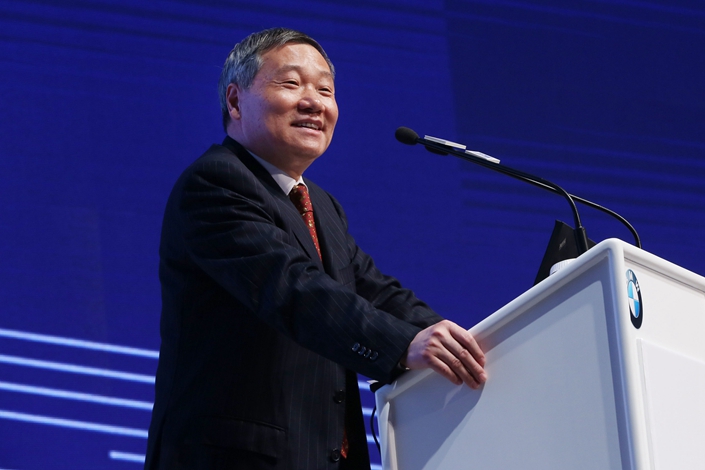 China’s former securities czar, Xiao Gang, added his voice to the chorus of financial industry insiders that have criticized the deadline for compliance with new asset management rules, describing it as “unrealistic and unfeasible.”

Speaking at a financial industry event in Beijing earlier this month, the former chairman of the China Securities Regulatory Commission (CSRC) said (link in Chinese) that it was “unrealistic and infeasible” to clean up banks’ “overlarge” off-balance-sheet wealth management products before Dec. 31, 2020.

Xiao said that the authorities should scrap the deadline and instead pursue a “steady replacement” of these products.

At the end of last year, Chinese banks were managing around 22 trillion yuan ($3.2 trillion) of outstanding off-balance-sheet wealth management products, according to industry data (link in Chinese). Much of the money was poured into the opaque shadow banking sector, circumventing regulatory oversight. In recent years, regulators have rolled out a series of measures to tackle the shady but profitable practices, as a part of a broader campaign to reduce financial risks and deleverage the economy.

The final version of the new asset management rules — which introduce industrywide requirements on leverage ratios, risk reserve funds and investment restrictions — was issued in April 2018 and applies to asset-management products offered by banks, brokerages, trust firms, insurance companies and other financial institutions. That version, in a concession to industry concerns, pushed back the deadline for compliance from June this year — as mentioned in draft rules released in November 2017 — to the end of 2020. Despite continued pressure to delay, or even scrap, the deadline, Wang Jingwu, head of the People’s Bank of China’s financial stability bureau, said in March that the authorities wouldn’t waver.

“Therefore, given the realistic difficulties, [we] should withdraw the directive of a ‘transitive period’ by 2020,” Xiao said.

Instead, he said, regulators should allow banks to gradually reduce the size of their “old assets” without a specific deadline.

Xiao’s appeal follows a discussion in early August between financial regulators and five of China’s largest state-owned commercial banks — including Industrial and Commercial Bank of China Ltd. and China Construction Bank Corp. — about the progress being made in the cleanup, at which bankers requested extra time, Caixin has learned.

Regulatory sources with direct knowledge of the matter said that this request is being considered, but that no decision has yet been made.

However concern has been expressed about the message that another delay in the deadline would send.

“Although financial supervision needs to respond to market changes flexibly, related policies should provide the asset management sector with stable expectations,” a source responsible for compliance at a mutual fund firm said. The source added that the regulators “cannot change halfway through just because of market complaints.”

Still, the “market complaints” are not baseless.

“The most difficult issue is how to value off-balance-sheet assets, which, it seems to me, is impossible,” a Beijing-based researcher at a foreign investment banking firm said. “Financial institutions want a smooth transition without damaging liquidity and the market’s pricing system,” the researcher said.

In July last year, part of Beijing’s response to industry concerns included the adoption of a “one bank, one policy” approach and easing investment limits on asset management products that don’t comply with the new rules.

Proponents of a softer deadline argued that a hard compliance deadline would force financial institutions to violate contracts they had agreed upon with their customers.

More aggressive proposals included a 10-year delay or a complete withdrawal of the deadline.

Xiao criticized shadow lending when he was chairman of Bank of China Ltd.’s board, a position he held for 10 years until 2013. He stepped down as China’s top securities regulator in 2016, after a three-year stint.

In an opinion article published by state-owned newspaper China Daily in 2012, Xiao said that shadow banking is “contributing to a growing liquidity risk in the financial markets.”

But he also acknowledged that “shadow banking has its advantages.”

“It helps businesses that need credit but who are unable to access it from traditional bank loans. Meanwhile, shadow banking continues to provide funds that allow certain half-finished projects to remain in construction, which spur the GDP growth rate,” he wrote.