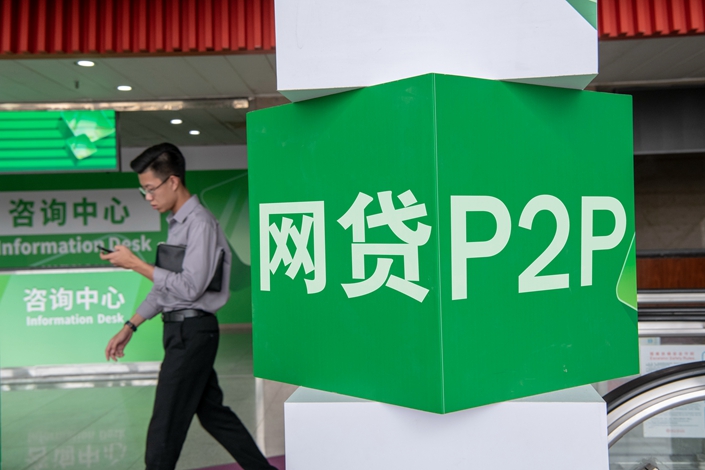 Regulators have been tightening their grip on the P2P industry since 2016 to curb abuse and fraud after billions of yuan of investors’ funds were embezzled. Photo: IC Photo

* A regulatory notice has ordered P2P platforms to share the data they hold on borrowers with credit bureaus, as part of a broader push to build a national personal credit database

* This move isn’t only aimed at reducing risks for the platforms and their investors, as it should also protect borrowers from unscrupulous lenders who charge usurious interest rates

(Beijing) — China’s financial regulators have taken another step forward in their campaign to intensify oversight of the scandal-ridden peer-to-peer (P2P) lending industry, ordering platforms to send data on their borrowers to credit reference agencies in an effort to combat fraud and control risks.

They also vowed a tougher crackdown on debt dodgers and defaulters, and encouraged banks and insurance companies to raise lending rates and insurance premiums for “untrustworthy” borrowers or even cut them off altogether.

P2P platforms were notified of the new requirements in a joint statement on Monday from two government leading groups charged with controlling risks in internet financing and online lending.

The main thrust of the notice is to compel P2P platforms to share the data they hold on borrowers with credit bureaus as part of a broader push by the People’s Bank of China (PBOC) to build a national personal credit database accessible to all lending institutions. Sharing information about borrowers will help P2P companies control their risks and give more protection to investors who lend money through their platforms.

The central bank has been working to create the database for several years, seeing the lack of a centralized credit information system as an obstacle to reducing risks not only in the P2P business but also for lenders in the formal banking system. In 2018 the PBOC launched Baihang Credit Scoring, a nationwide credit reference agency set up specifically to pool information from non-traditional lending channels. But platforms have been slow to sign up to sharing their data.

In Monday’s statement, the two leading groups told P2P platforms they should link their systems either to Baihang or to the national credit reporting database.

Pooling credit data isn’t only aimed at reducing risks for the platforms and their investors, however. It should also protect borrowers from unscrupulous P2P lenders who charge usurious interest rates. The statement said that among the information platforms need to submit to the credit bureaus are the interest rates they charge borrowers. If the rates are higher than the ceiling set by China’s Supreme People’s Court (SPC), borrowers will have the right to demand a reduction.

According to a judicial interpretation (link in Chinese) released by the SPC in 2015, interest rates charged by private lenders should not exceed 36%. P2P is classified as private lending as lenders and borrowers are matched via online platforms.

The latest notice builds on rules introduced in August 2018 that required P2P lending platforms to submit information about debt dodgers and defaulters to the Office of the Leading Group for the Special Campaign against Internet Financial Risks. The requirement was introduced in an effort to stop delinquent borrowers from taking advantage of the chaos in the P2P industry and the lack of a unified credit database to take out loans with the intention of not repaying them.

Regulators have been tightening their grip on the P2P industry since 2016 to curb abuse and fraud after billions of yuan of investors’ funds were embezzled. The number of functioning P2P lending platforms has fallen dramatically over the past four years, standing at around 700 at the end of August, down from 3,608 in November 2015, according to data (link in Chinese) compiled by Wangdaizhijia, a website focused on the P2P industry.

China has built the largest credit reporting system in the world, which includes the information on 990 million individuals and 25.9 million enterprises, Zhu Hexin, a deputy governor of the PBOC told a press conference (link in Chinese) in June. The national credit reporting system is operated by the Credit Reference Center of the PBOC which was also behind the creation of Baihang Credit Scoring.