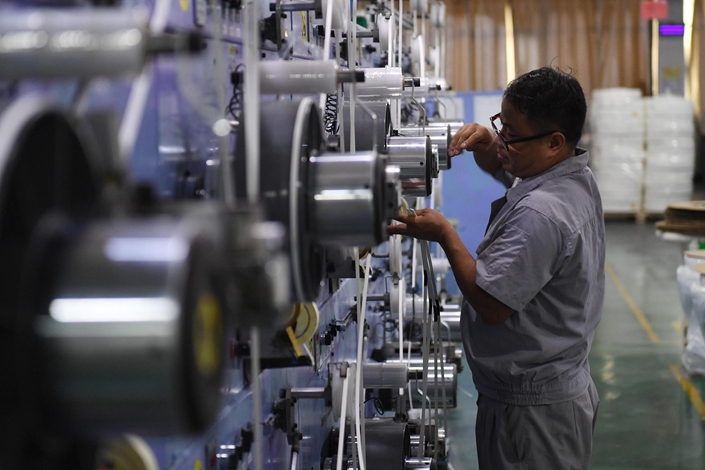 Fixed-asset investment, a key driver of domestic demand that includes infrastructure investment, grew 5.5% year-on-year in the first eight months of this year, according to data released (link in Chinese) by the National Bureau of Statistics (NBS). Down from 5.7% growth during the first seven months of the year, the reading marked the lowest growth rate since investment rose 5.4% in the first nine months of 2018. It missed a Bloomberg economist poll with a median forecast of 5.7% growth.

Government-driven infrastructure investment rose 4.2% year-on-year in the first eight months of 2019, up from 3.8% growth in the first seven months, marking the highest rate since the first four months of the year, NBS data showed.

Investment in real estate development rose 10.5% from a year earlier (link in Chinese) in the first eight months of 2019, down from 10.6% growth in the first seven months and marking the lowest rate since the whole of 2018, NBS data showed.

“After worsening across the board in July, growth in industrial production, capital spending and retail sales fell even further last month,” said Martin Rasmussen, an economist with research firm Capital Economics, in a note. “A weaker renminbi is unlikely to fully offset the increasing headwinds from US tariffs and cooling global demand, and we expect a further slowdown in economic activity over the coming year as a result.”

Value-added industrial output, which measures production at factories, mines and utilities, rose 4.4% (link in Chinese) year-on-year in August, down from 4.8% growth in the previous month. That was the lowest growth rate since the first two months of 2009 when the reading was 3.8%. It missed the Bloomberg median forecast of 5.2% growth. If the Lunar New Year is excluded — the holiday period causes significant fluctuations in economic activity — the growth rate in August was the lowest in more than two decades.

The subdued growth of industrial output is related to the slowing global economy and the trade friction between the U.S. and China, Jiang Yuan, an NBS official, said in a statement (link in Chinese).

“The prospects of an industrial recession pose significant downside risks to China’s GDP growth in Q3, prompting further expectations of more monetary and fiscal policy measures ahead,” economists with ANZ Research said in a note.

It’s becoming less likely that China will see a GDP growth rate higher than 6% in the third quarter of the year given that year-on-year growth rates of industrial output in July and August were both below 5%, according to analysts with investment bank China International Capital Corp. Ltd. The country’s GDP grew 6.2% year-on-year in the second quarter, when industrial output rose more than 5%.

China’s central bank cut the reserve requirement ratio (RRR) for commercial banks — which controls how much cash lenders must hold as reserves — by 50 basis points on Monday. It will cut an additional 100 basis points for some city commercial banks next month, freeing up a total of 900 billion yuan ($127.4 billion) of liquidity.

Retail sales, which include spending by governments, businesses and households, grew 7.5% (link in Chinese) year-on-year in August, down from 7.6% growth the month before. The reading marked the lowest point since April and the second lowest since May 2003, when the growth rate was 4.3%. Excluding car-related sales, which dropped 8.1% from a year earlier, retail sales grew 9.3% from a year earlier, up from 8.8% growth in July, NBS data showed.