Exclusive: Embattled Chinese Vaccine-Maker One Step Away From Delisting

By Di Ning and Denise Jia 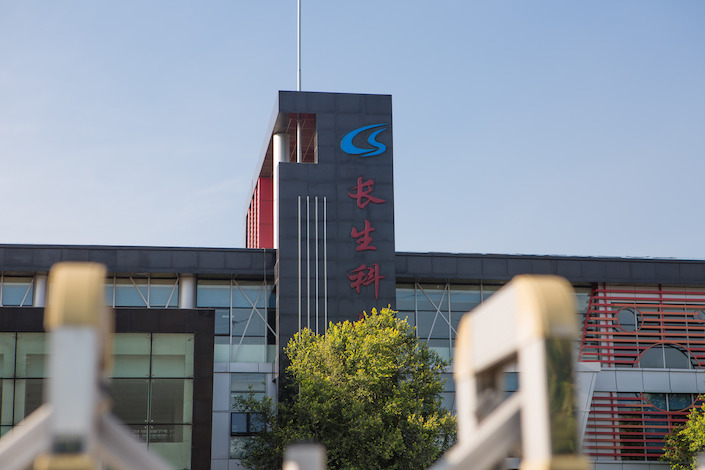 The stock of Changsheng Bio-technology Co. Ltd. may be delisted. Photo: VCG

The troubled drugmaker embroiled in China’s worst vaccine scandal last summer is one step away from delisting and may not be able pay a 9.1 billion yuan ($1.3 billion) regulatory fine.

Trading in the Shenzhen-listed stock of Changsheng Bio-technology Co. Ltd., which was found to have fabricated data for its vaccines for infants, has been suspended for six months since March 15.

As the suspension period has expired, the Shenzhen Stock Exchange will decide on final delisting within 15 trading sessions, the company said Sunday in a statement. Although the final decision is up to the Shenzhen exchange, a forced delisting is “almost surely” coming, several financial industry participants told Caixin.

In a spot check last July at Changsheng’s facilities following a tip-off from a former employee, China’s drug regulator found that the company fabricated production and inspection data for its rabies vaccines and sold nearly 500,000 substandard doses of vaccines to inoculate children against diphtheria, whooping cough and tetanus. Last October, China’s Food and Drug Administration revoked Changsheng’s pharmaceutical production license and imposed the fine of more than 9.1 billion yuan.

Delisting wouldn’t mean the conclusion of the company’s vaccine scandal. Changsheng still hasn’t paid the fine. Two courts in Beijing and Changhun, a city in in the northeastern province of Jilin where the company is based, have ordered enforcement of a payment order against Changsheng.

Changsheng Chairman Gao Junfang’s son Zhang Minghao, vice chairman of the company, told Caixin that all funds are frozen and the company has no control over the money. He said no decision has been made on how to pay the fine.

From the time the court accepted the bankruptcy application to the declaration of bankruptcy still requires a lengthy process, during which debtors and investors may file for restructuring or settlement, Tang said.

Administrative or judicial fines can’t be regarded as claims in bankruptcy, Tang said. Theoretically, after the bankrupted company pays off debts, if there’s still money left, it should go toward paying the fine.

“But in reality, after bankruptcy liquidation, if the company is insolvent, it won’t even be able to pay normal debt claims, let alone the fine,” Tang said,

Changsheng’s Zhang told Caixin that he is not clear about developments in the company’s bankruptcy procedures.