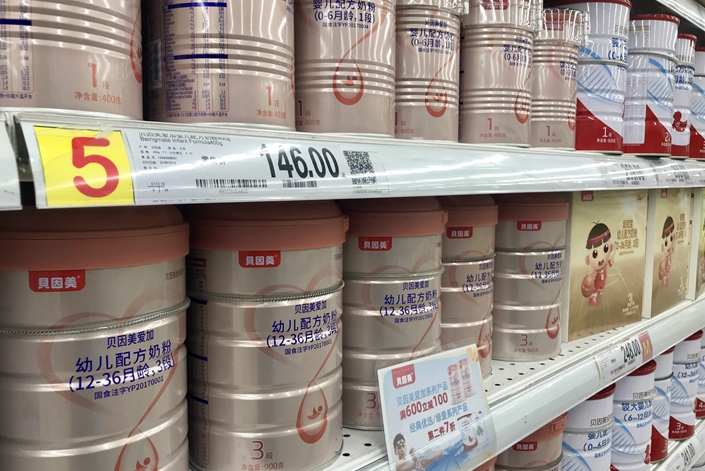 A proposed name change by a formerly highflying baby-formula maker that fell on hard times has drawn the attention from the country’s stock regulator, which has demanded an explanation.

Shenzhen-listed Beingmate Baby & Child Food Co. Ltd. made headlines last week when it announced (link in Chinese) it was changing its name to Beingmate Co. Ltd. The dropping of “Baby & Child Food” from its name reflected a plan for “diversified development” into such new realms as house tenancy, health care and daily use products, the statement said.

Beingmate’s strategic shift from its traditional core business in baby formula was the regulator’s biggest concern, prompting a request for further materials explaining the necessity and reasons for such a move.

Beingmate’s shift comes as its baby formula business has struggled in the last few years. The company was once a rising star when it took on New Zealand dairy Fonterra as an investor in 2015. But the partnership later soured, and Fonterra is now in the process of unloading its stake.

Read more
In Depth: Is China’s Former Baby Formula Leader Back From the Brink?

Last year, the company posted revenues of 2.3 billion yuan ($325 million), less than half the amount from 2014. For the first half of this year, it reported a net loss of 140 million yuan on revenue of 1.3 billion yuan.

In requesting more information on the name change, the regulator also noticed a lack of unanimity from the company’s board on the move, with two out of seven members either voting against or abstaining from the decision. Johannes Gerardus Maria Priem, who was sent to the company by Fonterra after the initial tie-up, voted against the decision.

Fonterra’s original investment made it Beingmate’s second largest shareholder with 18.8% of the company. But the two sides have been engaged in conflict since early 2017 on issues related to Beingmate’s financial situation. Board members sent by Fonterra have since publically accused the company of manipulating its financials.

In opposing the name change, Fonterra’s Priem argued that Beingmate should continue focusing on its baby formula business. He said even if a strategic change is to be made, there should be adequate thorough market research before such a move, which has not been done enough. Priem also got a form of backing from Beingmate’s Chinese founder He Xiaohua, who abstained from the name change decision.

Such a change signifies that Beingmate has lost faith in the baby formula business and hopes to increase revenue streams from other areas, a former executive at the company told Caixin, speaking on the condition of anonymity.

A Beingmate representative told Caixin that the company will soon issue a response to the regulator, insisting the change was made based on the company’s own legal procedures.