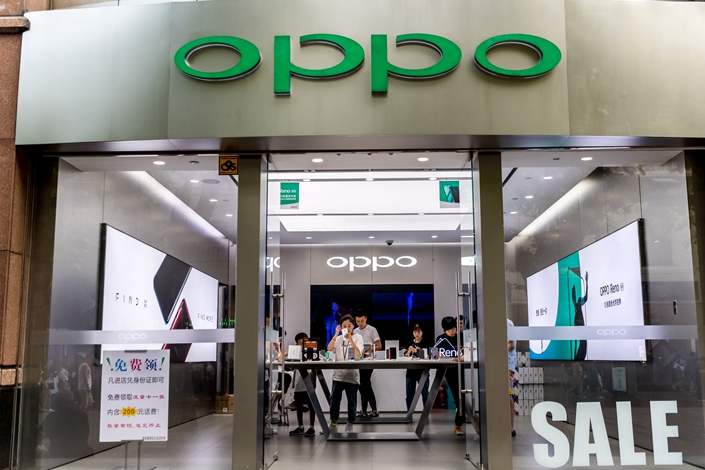 Chinese smartphone-maker Oppo said it would focus on overseas markets as its sales in the increasingly competitive domestic market dropped by nearly one-fifth in the second quarter.

In the first nine months of this year, 40% of Oppo’s smartphone shipments went abroad, and the company expects this to rise to more than half in future, Wu Qiang, the head of the company’s global sales, told Caixin in an interview Thursday.

Wu said the company’s total global shipments will continue to grow this year, driven by strong momentum in Southeast Asia and Egypt, even amid an industrywide downturn.

Oppo’s domestic setbacks this year have in part been driven by Huawei’s refocus on the domestic market. China’s biggest smartphone-maker has seen its global ambitions shaken due to its inclusion on a U.S. blacklist in May that restricted its access to the Google-made Android operating system its phones use.

Huawei’s strategic shift has squeezed other smartphone brands’ market share, Wu said, adding that Oppo was not satisfied with its performance in China for the past two quarters.

Oppo was still China’s second-largest handset vendor in the second quarter, but its market share dropped to 18.3% as shipments plummeted 18% to 17.9 million units, according to industry data tracker Canalys. That’s a stark contrast to Huawei, which saw shipments rise by 31% to propel its share to a record 38%.

That quarter, Oppo shipped 29.5 million devices worldwide, maintaining its No. 5 position with an 8.9% global market share, according to IDC. For all of 2018, Oppo’s global shipments rose 1.3% to 113 million units, a figure Wu expects to match this year

To further its global aims, the company announced last month that it would combine its domestic and overseas sales teams to form the global sales unit Wu heads.